Following the abrupt death, resurrection, and second death of his partner, a gung-ho cop names Max Dire gets an invitation to join a group of vigilante anti-hero police officers with a dark secret. All of the members have been screwed over in some way and have taken to dishing out their own brand of justice... werewolf justice! That's right, Max is slowly but surely recruited into a group of werewolf cops. As part of his orientation, he witnesses the wolf-cops (wolf-pigs? yeah... bad joke, sorry) singlehandedly take out a heavily-armed criminal organization while dresses in X-Men-like black spandex, but not before injecting themselves with some sort of drug. 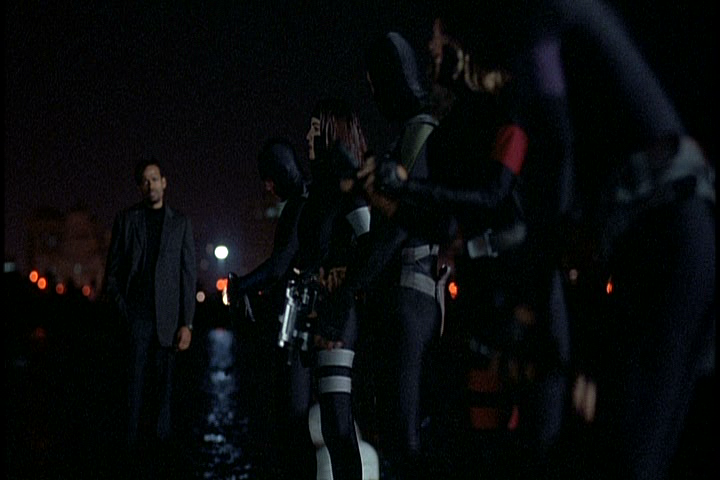 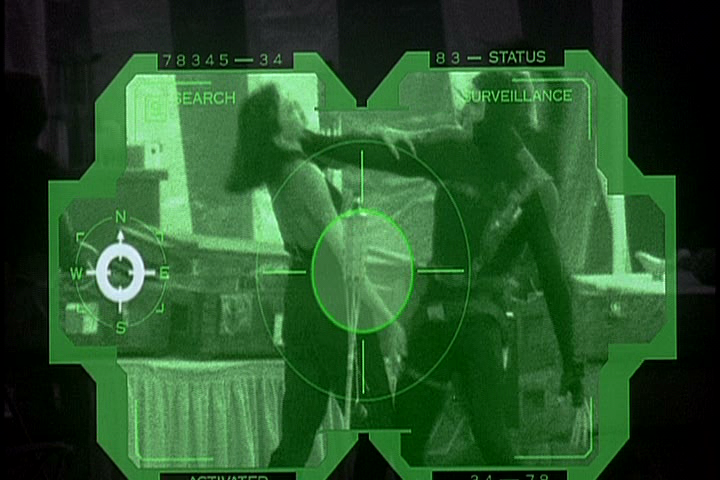 The initial reluctance and skepticism on Max's part as far as joining the group eventually goes away when he's seduced by one of the female members, leading to an awkward-looking sex scene, in which Max's pants are inexplicably ripped at the crotch and ass like he tried to do the splits and the actress playing the seducer has large pieces of tape visibly covering her nipples. 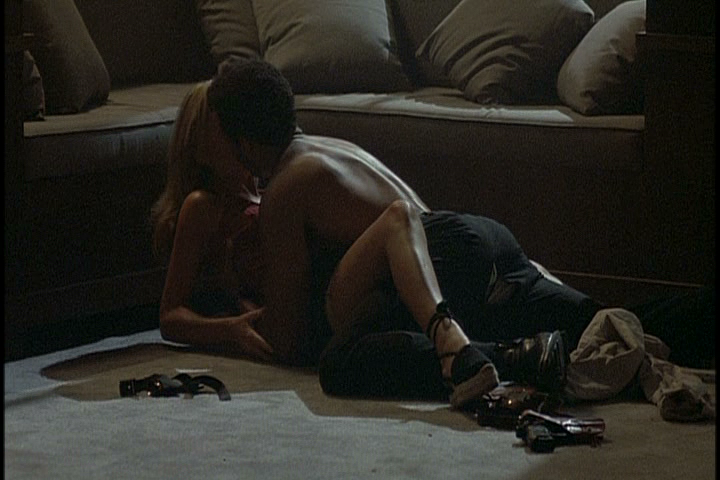 There's really not much to say in terms of my observations on the film. I don't know if I'd outright classify this as a horror movie. It's also an action movie and a crime drama - a true mash-up of genres if there ever was one. If there's a problem with the plot, it's that there's no clear-cut objectives for Max and the group of werewolf cops he aligns himself with. They're not trying to take down any specific antagonist and there's really no "black hat" to contrast them. All of the conflict stems from turmoil within the group, specifically as it pertains to Max and Adam Garou - the literal leader of the pack. As the film goes on, there's more revealed in regards to the lore of the group and especially their leader. That said, FULL ECLIPSE is basically a movie about a jaded cop who goes to the darkside and later has second thoughts about it, except with werewolves added to the mix. And, it should be said, that these aren't typical werewolves. The film addresses lycanthrope traditions, like the lunar cycle and physical reactions to silver, but the main catalyst for the transformations are an experimental drug that the Garou creates. 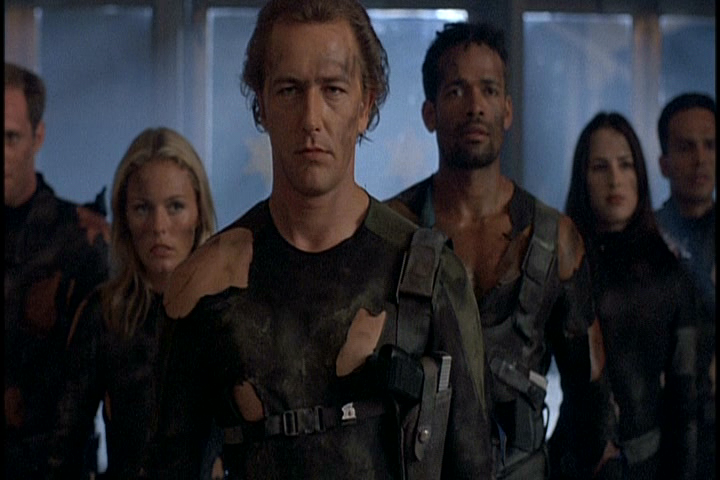 As far as the actual transformations themselves, the characters grow claws out of their knuckles like Wolverine. They also sprout fangs and there are some temporary facial deformities to emphasize their monstrosities, as if the bones in their faces were trying to break out of their skin. In other words, they're not covered with fur, however there's a pay-off towards the end if you prefer your werewolves to be a bit more traditional-looking. All of that being said, the makeup effects are far between but good nonetheless. I especially loved the visuals of the group in action. There are some great shots of them all dressed up in their black spandex and tearing shit up, but the action mostly takes a backseat to the plot and character interactions, which is fine. 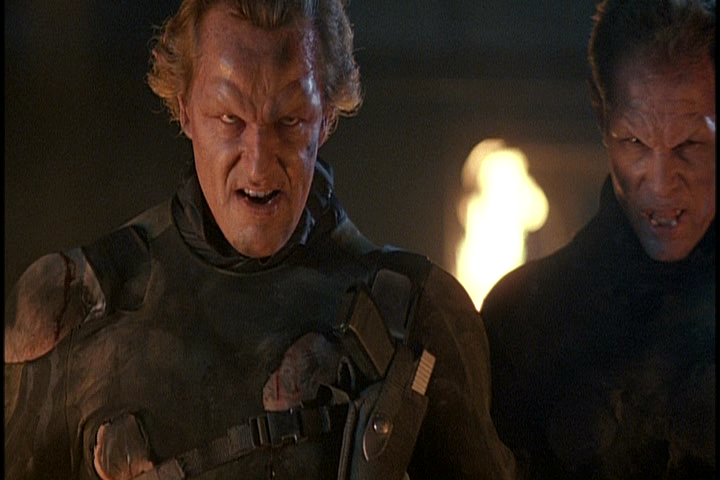 FULL ECLIPSE is directed by Anthony Hickox, who I mostly know from HELLRAISER 3 and the WAXWORK movies. That said, this is very reminiscent of HELLRAISER 3 from a visual, stylistic, and atmospheric perspective - minus Pinhead and the Cenobites destroying shit and killing people of course. This is evident right off the bat during a shoot-out sequence in a nightclub at the beginning of the movie. The club itself looks identical to the Boiler Room with its weird props and decorations. This also features the main supporting actress from HELLRAISER 3, Paula Marshall, who also worked with Hickox on at least one other occasion that I'm aware of. Other things of note that are unrelated to Hickox's involvement are a BEAVIS AND BUTTHEAD reference and the excessive use of stock Panther sound effects during the werewolf attacks. Also, other noteworthy actors include Jennifer Rubin (A NIGHTMARE ON ELM STREET 3) in a disappointingly small role and Dean Norris (BREAKING BAD). 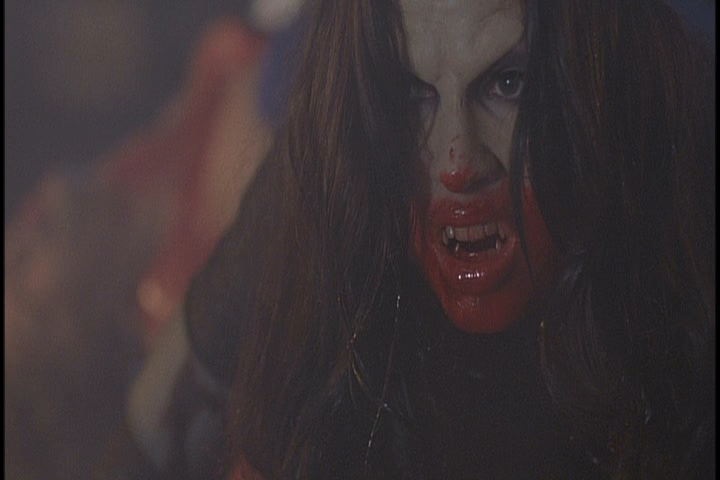 Overall, I really enjoyed this one. I'm a tad disappointed by the emphasis on action and drama over horror, but hey, what can ya do. It's entertaining for what it is and the cast is pretty good. I'll definitely be giving this one a watch again at some point down the line. I'd even be happy to buy it and add it to my collection if it had a decent release.