In an attempt to get away from strictly posting reviews, but yet fulfill my desire to dance... I mean, WRITE, I decided to initiate yet another potential weekly feature called "Death Rattle Arena", where I pick two movies at random and have them duke it out in order to see which of the two gets the Death Rattle seal of approval, whatever that means. The point would mostly be to take two films that have as little to do with each other as possible and dissect each one in order to see which film has the most strengths in certain areas.

Feedback here is crucial. I have no problem with not posting these in the future, but at the same time I think it's a fun idea to break up the monotony and do something outside of the box for you - the almighty reader - to enjoy. Let me know what you think. Should I continue to post these, and if so would you rather see two different films every week, or would you like to see a tournament type of thing where the winning film is paired up the following week against a new challenger? Also, based on what you see here, should I shorten future posts? Holla at 'cha boi.

The first two films to enter the completely SOLD-OUT Death Rattle Arena are, coincidentally, both directed by Guillermo Del Toro: BLADE II (Tale of the Tape) and PAN'S LABYRINTH (Tale of the Tape) And, yes, these really were picked at random from a list of over a hundred movies. To most, this match-up may seem like a no-contest, or a "squash match" to use wrestling terminology, but you may be a bit surprised at what I have to say about both films. 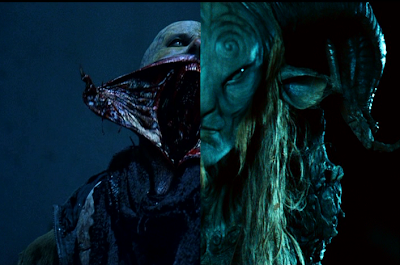 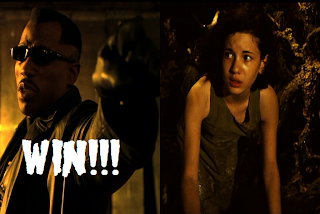 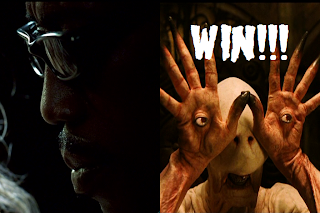