Dolph Lundgren goes back in time to prevent the most lethal bacteria in the history of mankind from taking shape.

After we get what sounds like a throwaway Richard Band score to open the movie, the story begins in Los Angeles in the year 2204. By that time, soldiers are walking around with vacuum cleaners strapped to their backs and most of the world's population has either died or suffered severe mutations as a result of a virus that has been out of control for the last two decades. Dolph Lundgren plays John Foster, a soldier who's one of a few "genetically unique" men and women with the good fortune of having a stronger than normal immune system. Foster's given the task by his commander of traveling back in time to the year 2004 to prevent the virus from spreading. Meanwhile, another group of rogue soldiers from the future are trying to keep Dolph from doing his job for whatever reason. One can only assume that Project Mayhem is alive and well in the 23rd century. 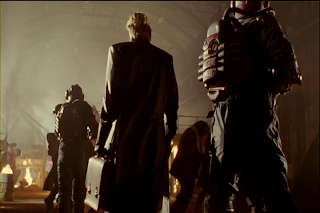 Once in "present day", we're introduced to an expedition team somewhere in the Arctic looking for who-knows-what. It doesn't really matter what they're researching. They're obviously the ones responsible for unleashing the virus, otherwise Dolph wouldn't have purposely crash-landed near their post. Long story short, Dolph and his men eventually tango with the rogue soldiers as the expedition team are caught in the middle. Lines are drawn, the heroes and villains and in-betweeners are established, and the fate of humanity lies in the hands of the victor of this poorly-shot straight-to-DVD battle royale. 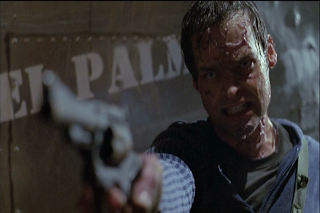 In case you didn't notice it at the top of the review, the film also stars Gary Daniels and Joe Montana. But don't get too excited. Daniels is both under-used and miscast in the film. He plays the sympathetic sweetheart to the film's only female character (it's an Arctic sausage party, y'all) when everyone knows he should be playing the goddamn villain instead of Joe Montana. And not the Joe Montana, as in the legendary NFL quarterback Joe Montana, but some random dude who happens to be named Joe Montana. Had the real Joe Montana been cast in the film as opposed to this fake Joe Montana, I might be OK with the fact that Daniels and his legit ass-kicking skills are under-utilized here. Daniels throws but a single roundhouse kick in the film... and it gets blocked! Unacceptable. 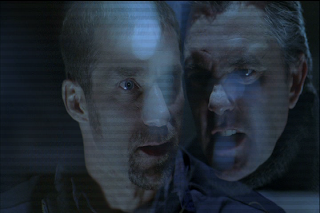 This screenshot was an accident, but it looks pretty sick, right? 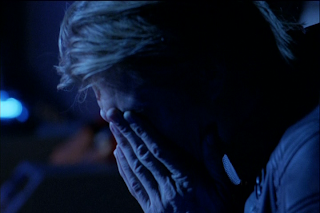 Cheer up, Dolph. I'm about to say something good about your movie.
While it's pretty obvious from the start that RETROGRADE is a cheap Sci-Fi movie, it's not so bad to the point where I wish Dolph Lundgren would have went back in time to prevent this movie from being made instead of stopping some fictional virus. It's pretty bad, don't get me wrong, and I was almost embarrassed for Dolph Lundgren while watching this, but it's also kind of enjoyable and would no doubt be a hoot to watch whilst ingesting alcoholic beverages and in the company of friends. Seriously, if you're not even slightly amused by the awkward fight scenes, the piss-poor special effects, the fact that they tried to pass off motorcycle jackets as space suits, or the acting that would suggest there was a first come first serve casting process, you're a pretentious douchebag.

Surprisingly, the film ends on a genuinely touching note that sort of made me forget about how terrible the rest of it was. Will it bring a tear to your eye? Probably. Also, I quite enjoyed the cast despite them playing a huge factor in dragging the film down in terms of credibility and competency. There weren't a lot of fresh "Hollywood faces" in the film, which gives it an old-school feel at times and is something I don't necessarily care about but can appreciate. And while the ridiculous fight scenes and action set-pieces (if you can even call them that) were good for a laugh, they were still disappointing for obvious reasons and were a bit more sparse throughout the film than I anticipated. That's about all I have to say about this movie, so I'll wrap this up by saying RETROGRADE is recommended if you have a chance to stream it online or rent it from your local mom n' pop for pretty cheap, and this doesn't only apply to Dolph Lundgren fans. Depending on what mindset you're in when you watch it, it'll either be so bad it's good or just plain bad.