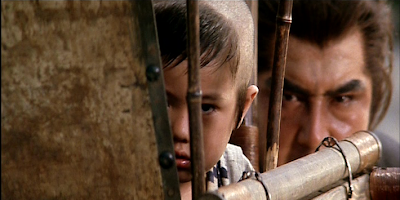 BABY CART TO HADES is the third film in the six-part LONE WOLF AND CUB series, and it's the talkiest and most dramatic of the first three films. It's not a complete bore-fest, though; in one scene alone our lead character Ogami Itto single-handedly slays more people than Jason in all of the FRIDAY THE 13TH films combined, and if it keeps going at this pace I'll be surprised if all of Japan doesn't become extinct by the time the series is over. 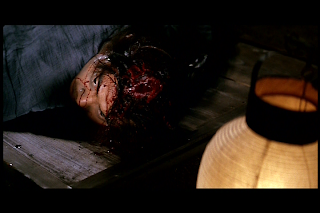 As Ogami Itto proceeds with his path of vengeance and bloodshed in this film, he finds himself in a situation where he saves a prostitute from a group of outcasts who more or less exploit vulnerable women and provide "adult entertainment" for the country's samurai (the synopsis on IMDB refers to them as Yakuza, but I don't recall them being referred to as such in the film - I could be wrong). Itto, for some reason, sacrifices himself for the prostitute, and in the process takes one hell of a beating without so much as batting an eyelash. Impressed and apparently aware of Itto's reputation, the group of smut peddlers ask him to do them a favor in exchange for the prostitute's freedom: kill a corrupt governor.

Seeing as there are six films in the series, it's obvious that Ogami Itto will ultimately overcome any obstacle he faces, but it's not to say that it's all smooth sailing for the deadly samurai, especially considering he has to protect his young son on top of everything else. While Itto's skills as a swordsman are consistently better than everyone else's, it seems that his nomadic "life as a demon" is starting to take its toll on his body, and the once fresh and sharp samurai is now worn and weary - at least in appearance anyway. Some of the shit he does with a sword is nothing short of amazing, quite frankly, and of course the credit goes to actor Tomisaburo Wakayama, who seems like a natural. 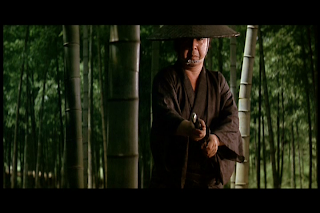 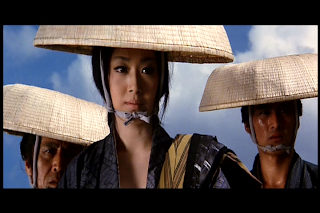 There's a great sub-plot involving a watari-kashi (a samurai-for-hire who's basically one step above a rōnin, according to the film) that Itto crosses paths with on a couple of occasions. This sub-plot pays off in what is easily one of the most intense, well-written, and goriest scenes of the first three films. Speaking of gore, one of the impressive things about the LONE WOLF AND CUB films thus far is how extremely violent they are. As I mentioned earlier, this film consists of a lot of dialogue, with more of an emphasis on story than stylized, violent set-pieces, but the final act of the film features enough action to make up for lost time. In other words, the violence is far between, but not few. With my exposure to 70's Chanbara films being limited to these particular movies and LADY SNOWBLOOD (and maybe a handful of others), I feel like I'm setting myself up for a huge disappointment by inadvertently watching the most violent of the bunch first.

Aside from being heavier on dialogue and lighter on action than the first two films, it's also the sleaziest due to a couple of rape scenes in the first act. I'd also be remiss to mention the Spaghetti Western influence on this one. Anyone familiar with the history of samurai films should know that they were a huge influence on Westerns (among other genres), and in the 70's it came full circle when the samurai films of the exploitation era drew influence from the Spaghetti Western films of the late 60's. In BABY CART TO HADES, the Sergio Leone-isms are much more noticeable than in the previous two films; whether this trend continues in subsequent films remains to be seen. As a whole, BABY CART TO HADES is underwhelming in comparison to the LONE WOLF AND CUB films preceding it, but technically solid and with a few memorable moments nonetheless.