A family takes a trip out to the country for the holidays, where they stay at an old house that's been abandoned for about a decade. The two oldest siblings, Cristian and July, spend their free time playing with high-tech camera equipment and investigating urban legends. Luckily for them, there's an urban legend about a ghostly little girl who dwells in the woods surrounding the house they're staying in. Seeing as ATROCIOUS is a found-footage horror movie, I'm sure you can take a wild guess as to how the rest of the story goes. 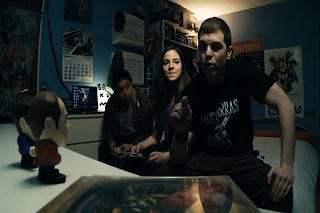 As much as I love found-footage horror, I always find myself being very critical of these films and questioning everything. Am I just too jaded a horror fan to accept them for what they are? For example, what we see in ATROCIOUS is supposedly compiled from over thirty hours of video that was found at a crime scene, but yet whoever edited everything together decided to incorporate footage of: A) the family on their road trip, B) the siblings goofing around, and C) the siblings walking around in the woods during the day, presumably getting a better feel of the area and prepping for the inevitable nighttime shoot. Yes, I understand that found-footage horror movies are supposed to be presented with as much of a narrative as possible and include things like character development, exposition, and creating a context for what ultimately happens in the film, but questioning those things will always be a bad habit of mine that I won't be able to shake. But, as far as the found-footage shaky-cam style being used in ATROCIOUS for a cinematic effect? Exceptional. 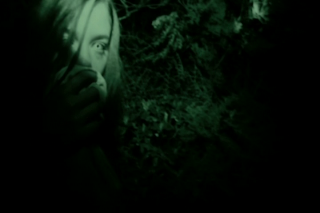 A majority of ATROCIOUS is devoid of scares, with very minimal evidence of the supposed urban legend bearing any truth and limited to things like strange noises in the night, dishes mysteriously breaking when no one's around, and so forth - all of which could be explained logically. The good shit is saved for the end, and by good shit I mean the sort of things you'd come to expect from a found-footage horror: the typical night-vision footage, lots of screaming and heavy breathing, and glimpses of what we're led to believe is some sort of boogeyman. Fortunately, seeing as ATROCIOUS is only seventy-minutes long, those looking for the pay-off won't have to wait very long. And it's not to say that everything leading up to the climax is uneventful either; the uncertainty as to what's supposedly lurking in the woods is just as unsettling as actually seeing it.

While everyone in the cast was pretty good and the teens were surprisingly not unlikable, the real star of the show is the outdoor location that they shot the film in: the woods. Even if the woods in the film weren't literally referred to as such by the characters, a "labyrinth" would be one of the first things that comes to mind when seeing how the trees are set up. Every path looks the same and it's evidently easy to get lost in, which comes into play with the whole urban legend that the teens are investigating (if you get lost in the woods at night, the female apparition will make her presence known). The exterior is legitimately creepy - even during broad daylight. In general, the editing is also one of the better aspects of the film; it's a bit much for a found-footage movie, but it's effective. 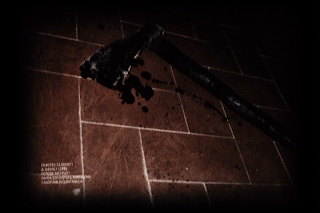 Without getting into details, I'll just say that the twist at the end didn't sit too well with me, but at the same time it didn't completely ruin the film. My problem with the twist wasn't necessarily the revelation, but rather how the movie really goes out of its way to explain everything to you. Aside from that (and even that's not a big complaint), I found ATROCIOUS to be a pretty solid and fun little horror movie. Tense, creepy, unsettling, and a quick enjoyable watch.