A shipment of heroin goes missing somewhere between Italy and New York City, and so the "Italian connection", Don Vito, blames it on a small-time pimp named Luca Canali (Mario Adorf). Meanwhile, a couple of hitmen (Henry Silva and Woody Strode) are dispatched from New York to find Luca in Italy and "kill him in the most brutal way possible", but Don Vito wants his men to eliminate Luca before the American hitmen find them, with hopes that they won't find out he's the wrong person. Basically, Luca Canali is a sitting duck who finds himself in a situation where everyone's trying to kill him and he's not sure why, and by the time he does find out what's going on, tragic circumstances will have already made it personal. 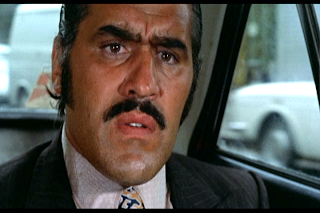 THE ITALIAN CONNECTION (also known as MANHUNT) came out the same year as director Fernando Di Leo's CALIBER 9, so I'm not sure if it's the first or second film in his Milieu Trilogy. Whatever the case, Mario Adorf, who played a scumbag in CALIBER 9, plays the anti-hero in this particular film. Despite him being a pimp and someone who occasionally abuses women, the film tries its hardest to make Adorf's character someone you can sympathize with. Based on reviews that I've read (and heard), it's quite easy for a lot of people to overlook Luca Canali's profession and accept him as the "good guy", mostly because of Adorf's emotional performance, but also because of certain scenes in the film that portray him as having a heart and genuinely being a good person who simply does what he does because, to a certain extent, he has to "hustle" in order to provide for himself and his family. 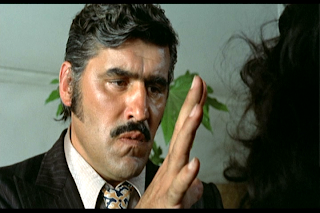 Being able to sympathize with the character of Luca Canali is crucial in regards to film's overall effect, but I for one was not able to invest too much of myself in the character, and thus didn't enjoy the film as much as I would have if the protagonist had been some working-class guy, or maybe even an anti-hero who was more along the lines of someone like Gastone Moschin's character in CALIBER 9. Make no mistake about it, though: Adorf is great in this film and the character development worked as far as establishing Luca Canali is a likable person, but I just personally wasn't very fond of him as the guy we're supposed to root for. Henry Silva and Woody Strode, on the other hand, are great as the American hitmen. I thoroughly their characters and thought they had outstanding chemistry, with Silva playing the party animal who enjoys the fringe benefits of his job, and Strode playing the more professional of the two who never drinks and rarely speaks. 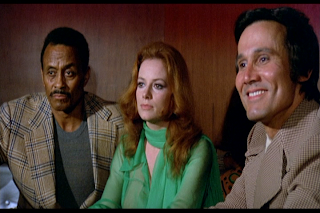 Femi Benussi, who I recognize mostly from STRIP NUDE FOR YOUR KILLER, plays a prostitute named Nana and spends a decent amount of time in the film without any clothing on. She's also the first person I've ever seen in any film on the receiving end of torture by way of nipple-pinching. Something else worth mentioning is Luca Canali's signature headbutt, which is his preferred method of attacking someone. At one point, Luca even destroys an inanimate object with his patented headbutt. Finally, there's a lot of the hippie, free-love aesthetic in this film, which I found to be pretty annoying.

I've only seen one other Fernando Di Leo film besides this, so I don't have a lot to work with as far as making comparisons, but I can say that this one isn't as politically and socially-minded as CALIBER 9, and it's more of a straight-forward crime film with a revenge angle that comes into play towards the back end. One thing that Di Leo has proven with the two films of his that I've seen is that he understands pacing. THE ITALIAN CONNECTION isn't a fast-paced movie per se, but Di Leo keeps the story moving along rather smoothly. There isn't much fat to speak of when it comes to the content. Aside from that, there's an impressive car chase scene in the film once the revenge angle kicks in, and the climactic shootout, which takes place in a junkyard, is also well-done. As I said before, though, I couldn't really get behind Mario Adorf's character that much, and while it's good, ITALIAN CONNECTION didn't particularly stand out for me.