EMPEROR OF THE NORTH takes place during the Great Depression and tells the story of a couple of bums who try to catch a ride on a dangerous train known as the "19", which is supervised by a vicious hammer-wielding railroad cop named Shack (Ernest Borgnine). Lee Marvin plays A No. 1 (what an awesome name), a daring hobo who's famous amongst the large community of vagrants as being one of the best train-hoppers around. Even Marvin's character, however, has enough sense not to set foot on the 19 because of Shack's reputation as a hobo-hater who won't hesitate to crack a bum's skull open with his signature hammer and throw him under the train.

Circumstances unite A No. 1 with Cigaret (Keith Carradine), who's basically the brash new kid amongst the homeless community, and they find themselves together on the 19, locked in one of the cars. A No. 1 comes out on top in what it essentially a pissing contest between the two before starting a fire in the car and allowing them to escape once the train stops. They go their separate ways, but Cigaret goes around telling everyone that he conquered the 19 and evaded the malicious Shack. This of course makes A No. 1 look bad, so he in return promises to ride the 19 all the way through its next trip to its final destination just to prove that he's still the top dog when it comes to train-hopping. Cigaret, looking to prove himself, attempts to one-up the veteran vagrant throughout the film as they both find themselves on the 19 together. 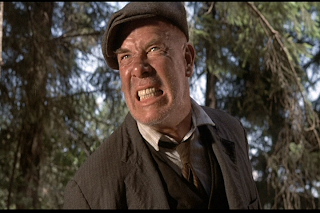 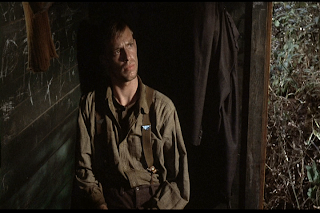 Without getting too much deeper into the plot, both of our lead bums eventually develop a bickering father/son relationship, with the grizzled A No. 1 as the mentor to a pupil who seems reluctant but is obviously soaking in as much wisdom as he can. All of this happens, mind you, with the lingering threat of Borgnine's character hunting them down and making railroadkill out of them. 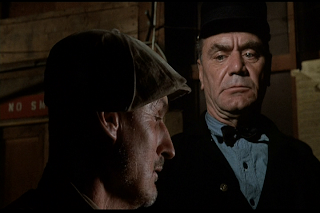 For me, EMPEROR OF THE NORTH is a film with highs and lows; when it's good, it's REALLY good, but then there are parts of the film that are - appropriately enough - like the cinematic equivalent of a filthy hobo in dire need of a haircut, shave, and shower. The film's strengths, though, lie in the areas where it matters most: the acting, the characters, and the screenplay. Lee Marvin provides an appropriate tough-guy performance, which - as everyone familiar with Marvin knows - came natural to him, as he typically came across as a legit bad-ass with a strong screen presence throughout a good portion of his career. Keith Carradine perfectly contrasts him as the young, loud, and obnoxious hobo who constantly challenges Marvin's character and pushes his buttons. The characters, despite emerging from the gutters of society, are utterly fascinating, and this is due to how effectively the film romanticizes the life of a hobo (or "Bo" for short, as they're referred to as in the film) and paints them as survivalists and thieves rather than beggars. 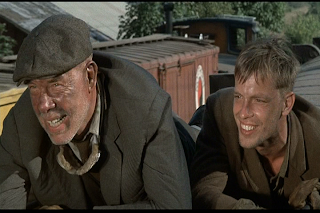 It should also be said that the script is top-notch, with some wonderful dialogue throughout the film. Most of the verbal gems either come from Lee Marvin's character when he's in smart-ass mode (which is pretty much the entire movie) or from the back and forth between a number of combinations of characters, be it Marvin and Carradine, or the always-intense Borgnine and one of the 19's crew members.

Another great thing about the film is that it gives you an insight into the complications of operating a train, which is something that a lot of movies set on locomotives tend to overlook, and understandably so since it's not necessarily important to the plot. It's still interesting, though, and it reminds people (myself included) who aren't familiar with trains that it's more than just some guy shoveling coals and another guy with a big, goofy hat sitting in the front of the train and pulling a lever. This also ties into the psychology of the film, meaning you have these people on a train who are busting their ass and basically just doing their job (including Borgnine's character to a certain extent), but yet they're presented as the bad guys, when, in reality, they're being terrorized by hobos. As I said, though, the characters are so fascinating and well-acted that it's easy to forget you're rooting for a couple of thieves - thieves who are victims of the Great Depression, but thieves nonetheless.

The film's weaknesses, in my opinion, lie in its editing and overall presentation, but luckily the "cons" are few and far between. Aside from featuring what is possibly the worst example of day-for-night shooting that I've ever seen, there are a few scenes that could have either been trimmed down or cut from the movie altogether, specifically scenes where Marvin and Carradine are rummaging through trash and whatnot.

I think I've rambled about this movie long enough, so I'll briefly mention some final things of note. This film features one of the funniest baptisms I've ever seen in a movie. Lee Marvin has magical hair that changes color from gray to brown - in some cases, multiple times in the same scene. There's a NASTY-looking stunt towards the end of the film where a stuntman falls back-first off of a moving train and on to the unforgiving ground below. There's a lot of slang and train terminology that may go over your head. Finally, as much as I love women in general and adore actresses from the 70's more than any other decade, it's refreshing to see a movie that doesn't have a female character shoe-horned into the script; aside from some female extras during the aforementioned baptism scene (including one whose revelation is beautiful!), there are no women in this movie. 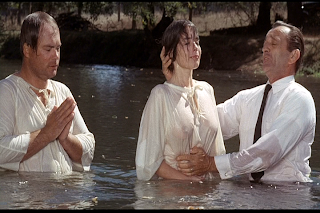 EMPEROR OF THE NORTH is a pretty superb film, objectively speaking; personally speaking, it's a good movie that could have been great if it was a tad shorter. Still, though, despite the movie being a bit long and featuring scenes that could have been trimmed down, the pacing is actually pretty good and there are never any moments in the film that are distractingly slow. Seeing as most of the people reading this are probably horror fans, I don't know if I can necessarily recommend this to any of you who haven't seen it, but I certainly wouldn't discourage anyone from watching it. In fact, I'd suggest it as a double-feature with another more genre-oriented film set on a train just so you have an excuse to watch it. A double bill of EMPEROR OF THE NORTH and TERROR TRAIN perhaps?