Picked by "The Cinemasochist" Justin Oberholtzer

I love pro-wrestling and I love films, but when those worlds collide, it's usually disastrous, which is why I tend to avoid movies starring pro-wrestlers - especially if they're released by WWE Films. Of course there are a few exceptions when it comes to the wrestling/cinema crossover (THEY LIVE, ROAD HOUSE), but then there are turds like... well, there are way too many to name, so let's just say anything starring Hulk Hogan for now. With WWE Films, despite their movies being critical and financial failures, they're still being pumped out on a somewhat regular basis for whatever reason. Amongst the latest batch of these films is THE CHAPERONE, which was absolutely shit on by critics and stars one of the top dogs in the WWE, Paul "Triple H" Levesque, in an ironic comedic role. 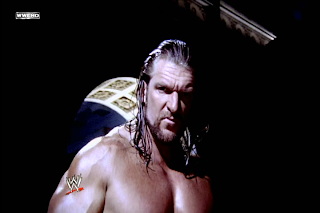 Triple H plays Ray, an ex-con and self-help enthusiast who tries to rekindle his relationship with his estranged daughter Sally upon his release from prison. Seeing as he's been absent from her life for the last seven years and locked up for his involvement in a bank robbery as a getaway driver, Sally initially rejects him and subsequently refuses to acknowledge his presence. Later, while breaking up a fight between two kids at Sally's school, Ray impresses her teacher (played by Yeardley Smith) and is asked to be the chaperone on their upcoming field trip, which he accepts in an attempt to spend some time with his daughter. 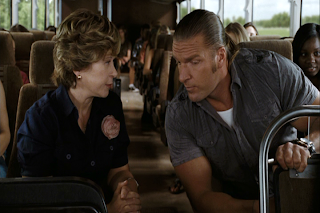 It isn't long before Ray's former associates come into the picture, but he's not happy about it; understandably so since he's the only one who got caught back in the day and served time in prison. Desperation takes over, however, when Ray's apartment burns down, and so he reluctantly seizes the opportunity to be the driver for one last heist, but he changes his mind in the middle of the job and abandons the criminals, leaving them to flee the scene of the crime on foot. The loot somehow winds up on the bus and Ray's fingerprints are on the car keys at the scene of the crime. Ray eventually assumes the role as the eponymous chaperone once the field trip starts, but complications arise when both the criminals and a pair of detectives end up on his tail. 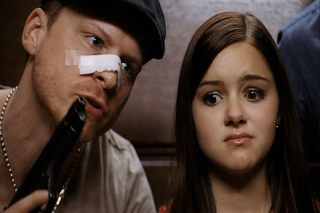 Sure my synopsis could be interpreted as being that of a dramatic film, but THE CHAPERONE is very much a comedy. Well, it's intention was to be a comedy anyway, but it's not very funny. Another thing that THE CHAPERONE isn't is terrible, or at least not as catastrophic as I would have expected. Personally, I found THE CHAPERONE to be fine and shockingly watchable. I would blame not hating this movie on the fact that I'm biased because of my love for wrestling and my admiration for Triple H as a performer in the ring, but, as I said before, I think most films starring wrestlers suck, and, honestly, it's because of my familiarity with him as a wrestler that I was unable to take Triple H seriously in his role even though his acting is serviceable. But yet, when I picture this film with a legit actor in the lead role, I shudder (not really). THE CHAPERONE treads all-too-familiar waters, which is the case for all WWE-related films, and the script reeks of a quick paycheck, but I somehow managed to find some charm underneath the layers of mediocrity. 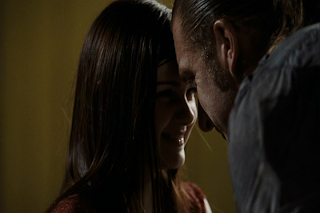 What I liked about Triple H's character was his struggle to become a better person and make things right with his daughter. Ray is a character with redeemable qualities. During his stint in prison, he developed a fascination with philosophical writings and books by self-help gurus, which contributed to his rehabilitation. He also regularly kept in touch with a female radio disc jockey whose show focuses on giving people advice and helping them through tough times, which he continued to do once he got out of the slammer. Oh, and he's also a dinosaur enthusiast. According to Triple H during the commentary track (yes, I listened to the commentary track), the dinosaur-loving aspect of his character isn't too much of a stretch; he's also interested in dinosaurs in real life and has even purchased a legit Tyrannosaurus Rex skull for his father-in-law Vince McMahon's office.

Aside from Triple H's character and how his relationship with his daughter evolves throughout the film, there just isn't a whole lot about this movie to speak highly of. The script is very average as I said earlier, and the film is visually bland and devoid of any style whatsoever. I'll give the film credit, though, one thing that it does well is feed you tiny bits of information and exposition in early parts of the film that don't seem to mean anything right away but eventually pay off in some form or another during the final act of the movie. An aspect I downright hated about the film were the bumbling criminal characters, who, by the way, are probably the worst bank robbers I've ever seen. In particular, they're very reminiscent of Joe Pesci and Daniel Stern from HOME ALONE, in that they have an edge to them but they're destined to lose. Also, were they so hard up for actors that they had to get Yeardley Smith? Smith also appears on the commentary track with Triple H and Ariel Winter, and at one point they talk about THE SIMPSONS, which is funny since the WWE makes an example out of THE SIMPSONS on a weekly basis by featuring trivia cards on their television shows reminding the viewer that Monday Night Raw is the longest-running episodic weekly show. Also, I have to wonder if the stoner bus driver character in the film was not a direct reference to Otto from THE SIMPSONS.