Set in the British-occupied Dingle peninsula of Ireland during World War I, RYAN'S DAUGHTER is a three-and-a-half-hour-long epic directed by the guy who did LAWRENCE OF ARABIA and DOCTOR ZHIVAGO. In other words, it's amongst the most unlikely of movies to be reviewed on The Death Rattle. Lead character Rose Ryan is the daughter of a bartender and a young woman with a little too much time on her hands. She's seemingly ostracized by her cruel peers for whatever reason, so she spends a lot of her free time walking on the beach and letting her imagination run wild. Obviously looking for someone to connect with on an emotional level, she pursues a widowed and much older school-teacher by the name of Charles, and it's not long before the two get married. As is usually the case with a young woman who quickly marries an older man (not speaking from experience, mind you!), the initial buzz slowly but surely fades as Rose matures and realizes that she may have made a mistake. In fact, on their very wedding night, there's an overwhelming feeling of awkwardness and a noticeable lack of chemistry between the newlyweds, which doesn't bode well for either of them. 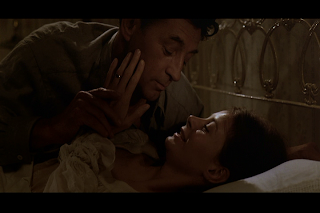 Before I go on, it should be said that Charles is a complete gentlemen and not the abusive husband who would typically be the type to drive a woman to ponder the possibilities of being swept off her feet by another man. I felt the need to point that out for a number of reasons, but mainly because Charles is portrayed by the legendary Robert Mitchum, who's basically known and remembered for playing the complete opposite of the type of character he plays in this movie. Charles is just a nice guy (he teaches children for fuck's sake) and I guess you could say he's kind of a pushover despite being stern and very much the ideal "man of the house". That being said, it's a very interesting role for Mitchum and one of the film's appeals. 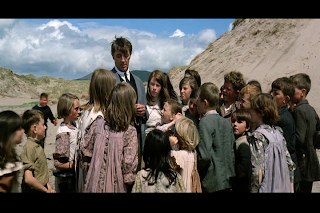 As I already mentioned, the film takes place in a small coastal town in Ireland, which was occupied by the British army much to the dismay of the town's residents. The fact that the British army is there is a very important part of the story for many reasons, one of them being that a young, decorated officer who was crippled and traumatized as a result of combat becomes the new love interest of Rose. The British officer, Major Doryan, and Rose becoming an item is something that I don't need to get into detail about, nor is it a spoiler since the poster pretty much shows you that a romance between the two is inevitable; it happens in a rather traditional manner in terms of romantic storytelling, but the catch is that Rose is not only cheating with her husband, but cheating with someone who's representative of the enemy. Scandal!

Part of what makes up RYAN'S DAUGHTER - and the part of it that seems to have been the most widely marketed (based on my miniscule knowledge of the film) - is the affair that Rose has with Major Doryan and how said affair affects those around her. But, if you think that RYAN'S DAUGHTER is a film that takes well over three hours just to simply tell a story about a confused young woman who cheats on her husband, you'd be sorely mistaken. The fact is, there's enough going on in the film to not only justify the running time, but to keep you utterly interested as well. For one, the obvious tension between the Irish and the British and the telling of a fictional story that takes place, historically, during a very crucial time for the Irish people. It wasn't too long after this film took place that an uprising was initiated by the Irish as a means of establishing the Irish Republic and putting an end to the British rule at the time, which is something that RYAN'S DAUGHTER addresses and plays with in a fictional manner, culminating with an astounding section of the film that focuses on the citizens of the small town (men, women, and children alike) teaming up with a group of rebels to retrieve a shipment of guns from the coast during a massive storm. This section of the film, it should be said, was filmed during an actual storm, with cast members being rained on and pounded by large waves during what one can only assume were extremely dangerous shooting conditions. If I were to be pretentious, I could say that the storm is symbolic of the "winds of change", but I'm sure this was purely done for cinematic effect. 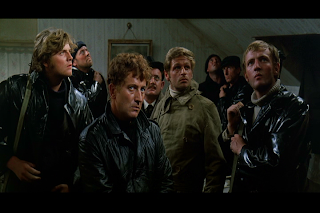 Another thing that the film addresses is the gossip that takes place amongst such a small, isolated community of people. Having grown up and currently living in an area that can be considered "country", it's something that I'm very well aware of. It's impossible to keep a secret when you live in a place where everyone knows each other, but yet people continue to make stupid and careless decisions knowing full well that they'll feel the wrath of the people around them in some form or another, be it shit-talking or physical confrontation - both of which Rose is on the receiving end of in this film. Most importantly, the film shows the effect that dishonesty has on the people who matter most, namely Mitchum's character.

Even though there's a lot going on in the film, by no means is RYAN'S DAUGHTER a breeze to get through. It's still quite the meal to digest in terms of quantity, but that's honestly one of the film's only drawbacks that I can think of. From start to finish, it's a solid and well-produced film that was written, directed, and acted by undeniable pros. As for behind the scenes tidbits, RYAN'S DAUGHTER was basically the result of director David Lean pretty much being given carte blanche for the success of DOCTOR ZHIVAGO. Critics, at the time, bashed this film and verbally lambasted Lean for how "excessive" they felt the film was, but many a critic have since changed their tune. And, for those of you who are unfamiliar with David Lean for whatever reason, he's a director who specialized in making "epics", meaning almost every project he worked on was an ambitious one. Also, the acting here is stellar all across the board - even Sarah Miles as Rose, who was married to screenwriter Robert Bolt at the time. Miles claims she insisted on auditioning like everybody else and didn't want to be handed the role just because her husband wrote the movie. Whether this is true or not, I have no idea, but she certainly does a great job and is believable as someone who men would lust after. 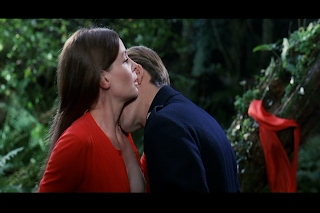 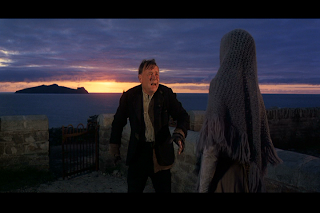 Actor John Mills, who played the village idiot Michael, won an Academy Award for his performance despite not having any dialogue, and rightfully so. Poor Michael: the butt of everyone's jokes, but he's too dumb to comprehend why, and John Mills successfully portrays Michael's inherent confusion without ever making a mockery of the mentally-disabled. My favorite performance in the film, however, is courtesy of Trevor Howard as my favorite CHARACTER in the film, Father Collins. Father Collins is the local priest, and seeing as just about the entire town that the film takes place in is Catholic, he's a very important figure. The thing is, Collins is a priest who drinks, smokes, and won't hesitate to smack someone upside the head (which he does), but there's never a time when you doubt his faith and his role as a priest. He keeps the townsfolk in check and he's more of a universal father figure (no pun intended) than anything. Coincidentally, I felt like Father Collins was the person who kept the film itself in check; the film would have suffered without the presence of this character. 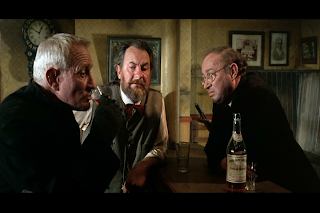 Finally, the most remarkable thing about the film, to me, is how absolutely gorgeous it is. Not necessarily how it's shot (although, for what it's worth, it did win an Oscar for Best Cinematography), but rather where the film takes place. Whoever did the location scouting really hit the jackpot with this Irish coastal town. It doesn't happen very often, but every once in a while I'll watch a movie that takes place in an exotic location so beautiful that I want nothing more at that very moment to go live there, and such was the case with RYAN'S DAUGHTER. 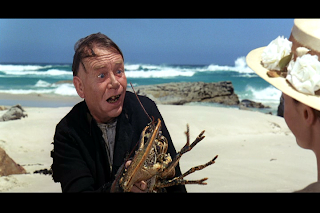 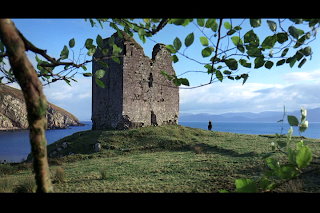 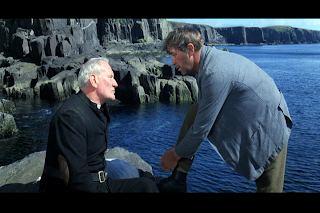 There's a part of me that wants to go back and watch what many would consider to be important films, but then there's the part of me that normally doesn't and just watches trashy horror movies instead. RYAN'S DAUGHTER is one of those films that makes me realize how much I'm missing out on when I ignore the "classics". RYAN'S DAUGHTER isn't perfect, but it's a stellar film nonetheless that I can't recommend highly enough to anyone who's interest is even remotely piqued by this review.

The main man, for me at least, is Robert Mitchum - a man who entranced me from a very young age and whom I admired and attempted to emulate, if not in style, then certainly in attitude and conduct on set, for Mitchum is known for his dedication and professionalism and is regarded by critics as one of the finest actors of the Golden Age of Hollywood. This, along with his penchant for being on set on time and knowing all of his lines, contradicts him famously interrupting a BBC interviewer who was gushing about his contribution to cinema to say, "Look, I have two kinds of acting. One on a horse and one off. That's it." He also succeeded in annoying his fellow actors by voicing his puzzlement at those who viewed the profession as challenging and hard work and implying that acting was very simple and all that his job needed was to "show up on time, know his lines, hit his marks, and go home."

It was on the set of Ryan's Daughter, during a night shoot, and after Robert had partaken of a few Irish whiskies, that a young lady swept up to him and asked for an autograph. She was an attractive young lady, so Mitchum, instead of flourishing his usual signature, suggested what he’d like to do to her body. Delighted at receiving such a long endorsement, the young Irish lass turned away and began to read what her icon had written, only to scream out in horror and dismay. Her boyfriend, a hulking Irish lad, rushed over to see what the commotion was all about and knocked Mitchum to the ground. Mitchum, a former professional boxer could have easily climbed from the dirt and taken care of his outraged attacker, but when his assistants and hangers-on collared the Irishman, Mitchum waved them to let him go. He felt he deserved what had happened and would literally take it on the chin.
They don’t make them like Mitchum anymore.