With backwoods horror movies (especially if they're slashers), if you've seen one, you've seen... most of them. You really gotta bring it nowadays and include something special to make a backwoods horror movie stand out from the rest of the bunch, like Eliza Dushku in a wife beater, Jessica Biel in a wife beater, or some memorable and gruesome deaths. The reason being, there's only so much a film can do with the backwoods formula before it starts to become cliche and isolate itself from the hardcore crowd who are looking for something different. In the case of MADISON COUNTY, it starts out rather promising before turning into a predictable, by-the-numbers backwooods slasher, but there's still enough here to make it a worthwhile watch. 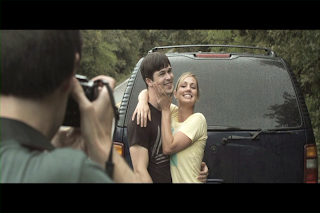 MADISON COUNTY opens with a TEXAS CHAIN SAW MASSACRE-esque scene in which a battered, shell-shocked woman is in the back of a pick-up truck, but instead of driving her to safety, the person behind the wheel has other, more violent intentions. As the woman realizes what's going on and tries to escape, she's intercepted by the redneck motorist, who parks his truck, exits, and proceeds to bash poor the woman's head in. From there, we're introduced to our lead characters - a group of young non-rednecks who are making a trip out to the country. The sole purpose of the trip is to assist one of the city folk, James, with his thesis, by tracking down and interviewing an elusive author who penned a book many years ago about a local serial killer who was never caught. In a twist of irony, they get more than they bargained for when they find themselves meeting the actual serial killer up close and personal. 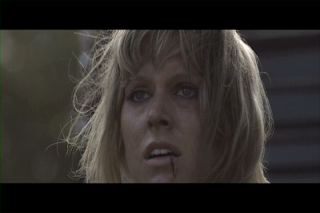 What I meant earlier by MADISON COUNTY starting out promising is that it's clear right from the start that the group of characters have a fair amount of depth and are actually likable, which you'd be hard-pressed to find in a slasher of this type; usually you get one or two likable characters and a couple of obnoxious ones that are simply there for the impending body count, but in this case - even the protective older brother of one of the female characters who invites himself on the trip - everyone is likable. On top of that, the film does fall into a lot of the traps of the backwoods horror genre, but it's written and presented in such a way that one could question whether or not the writing is indeed unoriginal and uninspired, or if the film is in fact poking fun at the backwoods horror genre by addressing some of the cliches (at one point the characters acknowledge the "wrong turn" convention and question the logic behind it); I'd like to think it's the latter, but the safe bet would be to lean towards the former given how the rest of the movie plays out. 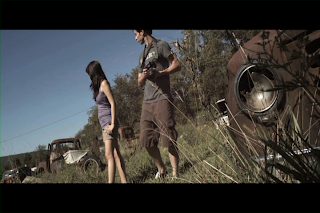 I mentioned the opening of the film resembling TEXAS CHAIN SAW MASSACRE (the original), but that's about where the similarities end, thankfully. Unfortunately, though, certain parts of the rest of the movie appear to be heavily inspired by the TCM remake, be it the scene where two lovebirds walk through an automobile cemetery, or the whole secrecy aspect involving the locals and the legend of the murderer that supposedly remains at-large. Towards the middle and back end of the film, we get a lot of boring scenes that follow the characters as they walk through the wilderness and snoop around the various shacks and sheds that litter the area, looking for the aforementioned author and unintentionally making themselves available to the killer, who inevitably makes his presence known. 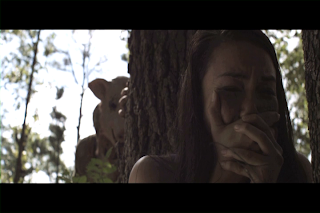 MADISON COUNTY would make for a great Saturday night rental to the casual movie fan. But being the jaded fuck that I am and watching it through critical eyes, it's kind of a disappointment in certain respects, and on the other hand it's a perfectly decent little backwoods slasher that doesn't overstay its welcome. Some of the kills are satisfyingly vicious and one of the biggest surprises for me was the score, which was quite good. The main highlight of the film for me, though, is Nick Principe as the killer, Damien. Chances are the majority of you wouldn't recognize Principe on the street if you bumped into him, but you've probably seen him in a few things. One of his most well-known roles is as the masked killer from the LAID TO REST movies, Chromeskull. Here, despite being under a hood and not having any dialogue, Principe uses posture and body language to make his character effectively terrifying. Plus, the dude's almost seven feet tall, so he's inherently intimidating anyway.

Overall, I'd recommend this movie to the casual movie fan, the backwoods horror enthusiast, or to someone who likes to keep up with newer horror releases, but otherwise I wouldn't suggest going out of your way to see it. As I said, the main characters are likable, the killer is great, the death scenes are decent, but it's not gonna blow your mind in any way and it certainly doesn't live up to the amazing, fun-looking Grindhouse-style poster that was attached to this film at one point. On the plus side, it's only around seventy minutes long, excluding the end credits, so it won't take up too much of your time if you decide to check it out.