After the film's foreboding opening sequence that strangely resembles the music video for Radiohead's "Karma Police", we're introduced to Mark and Mary - an upper-class married couple who, along with their dog and young son, arrive at a rather large house up in the mountains for what initially seems like a quiet getaway from the hustle and bustle of the city. Turns out it's not really the case. Their marriage is falling apart to the point where they're crying during sex and they're also mourning the death of their only daughter. As for the circumstances surrounding her death, that's something that's revealed as the movie goes on. Things only get worse as the proverbial black cloud hanging over them unleashes a downpour in the form of a group of sadistic psychopaths who invade their home and make their lives a living hell. 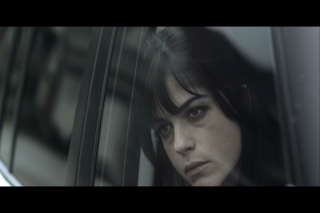 Bobby and Jane are not a married couple but pretend to be one. Or maybe they are. You never really know for sure. They're an unusually nice couple - about the same as Mark and Mary in terms of age - who, along with their abnormally large nine year-old son, randomly show up one morning and insist on dropping off some firewood. The timing for their arrival is peculiar though, and so are the circumstances. For one, it's a gated property. Secondly, Mark, Mary and their son found themselves essentially being stalked the previous night as a car parked at their gate and sat their for a little while with its headlights beaming on the startled family. But, despite being somewhat aloof and understandably reserved, Mark invites the family to come back for dinner that night. Huge mistake. 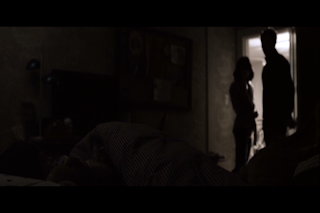 The intruding family initially comes off as very obnoxious, pushy, and nosy. I would've told them to "fuck off", personally. That said, if you're dumb enough to invite people like Bobby and Jane and their son into your home, you deserve what's coming to you, which is why I found it hard to sympathize with soon-to-be victims at first. I changed my tune once I realized that the other family would've probably found a way into their home regardless if they were invited or not. This becomes evident during the dinner scene itself when the other family slowly out themselves as being insane. For the most part it's civil, but they do a good job of pushing the buttons of Mark and Mary in ways that would make most people lose their shit. 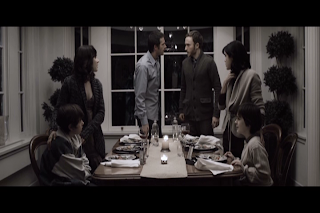 The dinner scene itself is a highlight of the film for a number of reasons. It's tense, awkward, and a lot more creepy than it has any right to be - namely because of what the dinner guests do without Mark and Mary even noticing. As a matter of fact, what they do is so subtle that anyone watching this would have to be paying attention to catch it, but I can't see why anyone invested in the film by this point wouldn't be glued to the screen because of the tension alone. Needless to say, the night goes to shit and the visitors are thrown out of the house, and from there it transitions into a relatively formulaic, mean-spirited home invasion movie that takes some shocking turns. 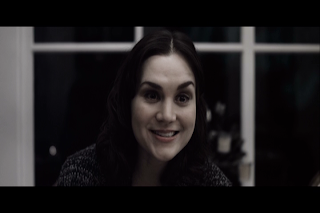 Considering there have been many home invasion movies in the past - a lot of which aren't unlike IN THEIR SKIN - it was really easy for me to draw comparisons between this and other films. The first movie I thought of was THE STRANGERS but with kids added to the mix and without the cool masks of course. Another obvious film I thought of was FUNNY GAMES, but without the social commentary, in the sense that a family's domesticity is considerably shaken up and ultimately damaged. But then again, the family here is already falling apart in the first place, which is one of the main reasons why THE STRANGERS came to mind. 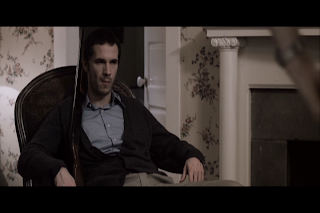 As far as the characters, Bobby in particular is a memorable one and played amazingly by James D'Arcy. Bobby is like a mix of French Stewart and a domesticated version of the Hitch-Hiker from TEXAS CHAIN SAW MASSACRE. He's the type of guy who you wanna punch in the face after talking to him for a few minutes. Playing "Jane" is Rachel Miner, who I normally can't stand as an actress. Not that I think she's "bad" or anything, but something about her bugs me. However, I think she does a good job here, and she really fits the type of character she plays for reasons that I needn't get into. Let's just say her unusual acting qualities work to the benefit of her character. At the end of the day, Jane is just as much of a weirdo as her husband, but she's a subservient weirdo. It should be said, though, that I had a hard time deciding who was the biggest creep out of all the antagonists. It's a pretty level playing field in terms of how crazy they all are, but something about the son, Daniel, is unsettling, and a lot of this simply has to do with how the young actor looks and plays the part. As for the protagonists and two lead actors, I don't know much about Joshua Close (who also wrote the movie), but he looks a lot like British actor Sean Harris to me. Selma Blair, on the other hand, is an actress I love and she's great in this, as expected. Naked too! If you're into that. 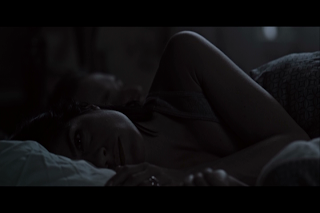 IN THEIR SKIN is a fittingly dark movie in terms of its visuals and cinematography. The grayish tint gives it a bleak and depressing aesthetic, so it goes without saying that there's nothing bright or flashy about this movie. One of the biggest surprises for me was Keith Power's score and especially the song that plays over the end credits, which is one of the best pieces of original music I've heard in a movie in a long time. As I already alluded to, IN THEIR SKIN puts an emphasis on the family structure and the idea of what a "perfect family"is, but it ultimately doesn't anything new in terms of home invasion movies. There's inherently not a lot of replay value here when you consider that this type of movie has been done to death, but it's definitely worth at least one watch because of how surprisingly tense and creepy it is; not "creepy" in terms of spooky, but creepy in terms of how much the antagonists and their actions get under your skin. One of the main complaints I have, though, is that the ending is a little too "Hollywood" for what I think the film deserved, but I'll just leave it at that.