Set in snowy Minnesota (and occasionally North Dakota) during the 80s, FARGO revolves around a down-on-his-luck used car salesman named Jerry Lundegaard, who hires a couple of goons - the loudmouthed Carl and the silent oaf  Geaer - to kidnap his wife with hopes that her wealthy father will fork over some cash and they can split it amongst themselves. In reality, though, Jerry's intentions are to pay off some major debt rather than live high on the hog. In typical Coen Brothers fashion, however, nothing goes according to plan. In fact, shit goes wrong at every turn, whether it be Jerry's bumbling attempts at covering up the kidnapping or Carl and Geaer constantly plagued with bad luck, bad timing, and obstacles of every kind. 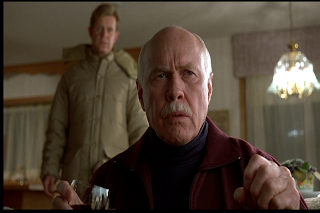 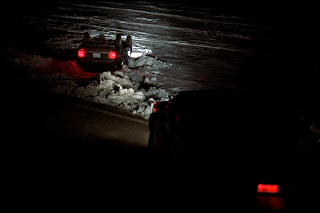 It isn't until the second act that we're introduced to the character who eventually becomes the focal point of the film: Marge Gunderson, played by Frances McDormand, who won an Academy Award for her performance. Marge (or "Margie" as she's often called) is the cop who's assigned to deal with the trail of bodies (and clues) that Carl and Geaer left in their wake as they struggled to pull off a simple transport of their hostage. I haven't seen FARGO since it originally came out in the 90s, and I remember being lukewarm on it at the time for some reason. I think a lot of it had to do with the dark comedy of the film going over my head. That said, watching it now as someone who's a lot more knowledgeable when it comes to cinema, I can certainly understand why FARGO got as much critical acclaim as it did upon its release. But, most of all, I can see why McDormand got the praise she did for her performance as Margie. As far as the character, Marge is very pregnant and a damn good cop. The manner in which she initially gathers clues at one of the crime scenes and subsequently conducts her investigation seems effortless, and her and her husband Norm are so happily married that it's sickening. With that in mind, it's clear to me why Marge is such a crucial character in FARGO. She's the much needed light in a world of darkness, and the manner in which McDormand provides that light is simply amazing and strangely touching. Her monologue at the end of the film in particular is so simple, but yet compelling and moving, and I'd go so far as to say that there are very few actresses who could've pulled off what she did here. 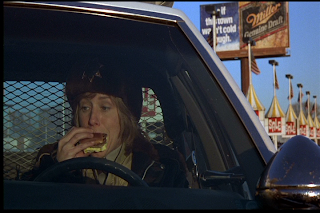 Getting back to what I said about the film's dark comedy, FARGO is about as black a comedy as you can get. There's a lot to be said about the manner in which the Coens can turn unfortunate and tragic situations into comedy. For example, what should've been a tense and borderline Hitchcockean moment of suspense as the goons are caught with a dead body ends up being utterly hilarious. And when everything goes wrong for Jerry and the whole that he's dug for himself becomes deeper and deeper as the film goes on, you can't help but laugh, especially when it come to how his father-in-law never ceases to inadvertently ruin his plans. When it comes to Jerry, though, there's an equal amount of credit that should be given to how he's written by the Coens and how he's played by William H. Macy, who nails frustration, desperation, and disappointment in a way that I can't imagine anyone else doing. 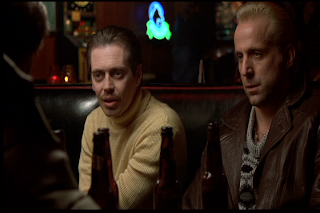 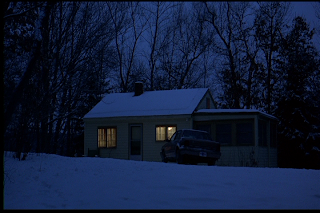 Aside from being completely successful as a black comedy with interesting characters, FARGO is also a gorgeous film with masterful camera work and lighting, and this is evident right from the start as the film opens with a station wagon slowly appearing from out in the distance as Carter Burwell's epic score brings to mind a Spaghetti Western showdown or a massive funeral procession. The juxtaposition of this beat-up station wagon and a big score is one of the many interesting contrasts that appear throughout FARGO. For example: cold weather and warm attitudes/hospitality, pregnancy (life) and murder (death), blood and snow, Carl (short and loud) and Geaer (tall and quiet), a happy marriage (Marge and Norm) and a doomed marriage (Jerry and his wife), well-mannered people and horrific crimes, bad situations and humor, etc. In short, FARGO is amazing and pretty close to being a masterpiece. Still not my favorite Coen Brothers movie, but very close.