En route to a Halloween-themed dance, a group of teenagers make a detour to an abandoned house in the middle of nowhere to pull a prank on the new girl, Ellie. One of the teens, Snail, tells a story about an urban legend surrounding a deranged caretaker named Adam, who supposedly went insane many years ago and held his wife hostage out of jealousy in the very house that they snuck into. Adam's wife eventually tried to escape with their daughter, which drove him to finally kill her. He later disappeared, and thus the urban legend was born. By the time Snail finishes the story, a mysterious figure, who bears a resemblance to this Adam character, makes his presence known, killing the teens' limo driver and subsequently turning his attention to the kids. What happens next kinda goes without saying. Judd Nelson, Jennifer Tilly, and Jonathan Breck appear in the film respectively as Ellie's father, a teacher who wants to hook up with one of the teenage boys with hopes that a scandal will make her famous, and the teens' limo driver. 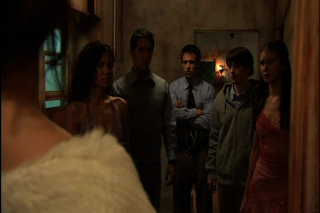 I went out of my way to watch and review THE CARETAKER since it takes place on Halloween and it's fairly obscure. It generally has bad reviews everywhere you look, but I'm a sucker for slashers and wanted to give it a shot regardless. Anyway, aside from a quick scene in which the teens stop at the Halloween dance to pick someone up and you see people in costumes and masks, there's nothing else in the film that would indicate that it takes place on Halloween. In other words, it's not a Halloween movie per se, but rather one that simply takes place on the holiday and doesn't make much mention of it. It would have been cool if the teens in the film were actually dressed up for Halloween instead of wearing dresses and button-up shirts, but whatever; I can't really hold that against the movie.

THE CARETAKER starts out promising enough. It opens with some random dude getting killed by the titular caretaker in the house that the rest of the movie later takes place in. Once the main characters are introduced, the film goes back to the house, where another dude shows up with his big-breasted girlfriend (it's later revealed that this dude was supposed to be part of the prank), which leads to some obligatory female nudity and even more kill scenes. The kills are shitty, but I appreciate a body count being established so early on in the film. The problem with the kills is that they're not shown on camera; instead, we get close-ups of people's faces as they're dying. This, unfortunately, is a recurring thing in the film. There's barely any gore, and what little blood and gore effects we do see are pretty cheap-looking. But at least the nudity is decent. The female character who exposes herself discovers that her fake boobs glow when she holds flashlights up to them. "Boobalanterns!", she says. What a keeper. 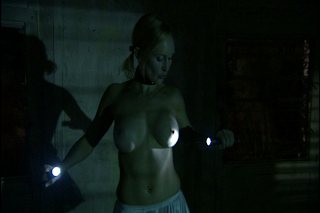 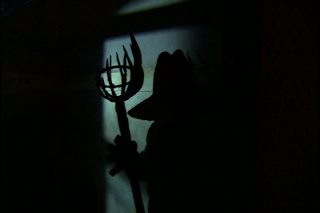 As far as the killer, he looks pretty goofy. He's basically dressed like a landscaper, except with a rag covering his face. The killer's weapon? A fruit-picker. What's even funnier than the fact that the killer uses a fruit-picker is that he actually picks grapefruits from trees when he's not murdering people.

The main problem with this film, amongst many little problems, is that it's boring and a little too tame despite its adult elements. If you took out the nudity (which was great, but completely pointless), removed Jennifer Tilly's character from the back end of the film, cut out the swearing, and removed the twenty seconds of pathetic gore footage in the film, you could probably show this on Nickelodeon. In other words, because of the script and the film's tone, it feels like THE CARETAKER was made for a teenage audience, but then there are these adult elements in the film that prevent it from being a teen film while still maintaining the mentality of a teen movie. Make sense?

An example of how dumbed-down this movie is would be the big reveal at the end, or at least a scene that makes an allusion as to who the killer is without actually unmasking the person. That's all I can really say about it without spoiling anything, but then again I wouldn't recommend this movie in the first place and wouldn't feel bad if I did ruin it for everyone. Let's just say that even Stevie Wonder would be able to see the twist coming from a mile away. Long story short, CARETAKER is garbage. Avoid it.