As if it weren't obvious enough by the title, MARDI GRAS MASSACRE takes place in New Orleans in the midst of Mardi Gras. The movie more or less opens with a mysterious man walking into a bar, looking to spend some serious cash on hookers. He asks a couple of prostitutes for the most "evil" woman in the bar. Apparently these hookers aren't in the mood to make money, because they point him out to a well-endowed brunette in a red dress instead of seizing an opportunity to turn a trick. Turns out they made the right decision; the mysterious man, listed in the credits as "John" (get it?), takes the brunette back to his apartment and ritualistically kills her in a special room, in which sits a shrine to an Aztec goddess with an inaudible name. The "evil" brunette is the first of a few victims that the serial killer claims in MARDI GRAS MASSACRE. 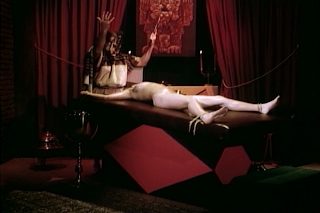 There's barely a police procedural element to the film. A homicide detective is introduced, presumably to contrast the serial killer and play the role of the "white hat", but before he can even get crackin' on the case he ends up hooking up (pun intended) with one of the prostitutes from the earlier bar scene. The cop takes the hooker out to dinner for questioning - and makes her pay! The dinner turns into a one night stand, and next thing you know they're walking through the park and holding hands (padding). So much for the investigation. The lead detective on the murder case starts dating a witness, leaving the killer to run willy-nilly on these hoes. And speaking of padding, there's lots of it - mostly extended scenes of nasty chicks dancing in strip clubs, or just shots of people walking. 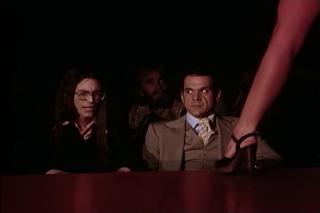 Getting back to the dinner scene I referenced, this part of the film alone speaks volumes about its quality. As they're eating dinner, an argument breaks out at the table next to them. Some guy stands up and proceeds to slap one of the women at his table with barely enough force to squash a mosquito, but she sells it like she just got hit in the face with a baseball bat. The cop gets up, slams the woman-beater up against a wall, and another woman calmly gets up with a shit-eating grin on her face and grabs a champagne bottle, presumably to hit the cop over the head with. Ten minutes later, she's intercepted by the hooker and thrown to the ground. Obviously it wasn't ten minutes later, but it may as well have been. Bitch was slow. What I just described was one of the laziest "fight scenes" I've ever witnessed in a film. The rest of the film is just as lazy, and just as great for all the wrong reasons.

Most of the movie consists of the same routine on the serial killer's part repeating over and over. He picks up a hooker at a bar or at a strip club, takes said hooker back to his apartment, leads her to the special room, ties her up, disappears and suddenly re-appears from behind a curtain with an elaborate gold mask on, rubs oil on the hookers' breasts, babbles about how "evil" she is, and finally cuts her heart out. Accompanying these scenes is the same thumping disco track, which actually sounds quite ominous despite being... a disco track. As a matter of fact, the entire soundtrack is disco music - and you know what? It's not that bad! Most of the music is your standard disco bullshit, but there are certain instrumental pieces that are both sinister and quite tempting to get up and dance to.

Interestingly, one of the killer's victims (played by Nancy Dancer) breaks out into an impromptu ballet dance sequence right before getting murdered, whilst naked. Yes, naked ballet. To the film's credit, I've never seen another film where a naked chick does ballet. If any of you out there have "watching naked ballet" on your bucket list, you might wanna check out MARDI GRAS MASSACRE. The thing is, this doesn't even qualify as a WTF scene because there's actually a reason for it. However, the short amount of time that Catfish appears on-screen is another story. Catfish is an obnoxious pimp who speaks in rhyme, and he's hilarious. Another WTF moment comes when the killer picks up a stripper following one of her dance routines where her entire body is painted red and she has devil horns on her head. Her dance isn't the WTF moment, but rather the fact that she leaves the club in full body-paint with "John" and apparently doesn't feel the need to clean herself up. 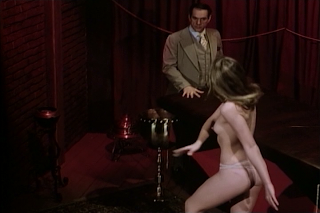 As much as I seem to be picking on it, MARDI GRAS MASSACRE is one of those films that you really have to be forgiving with. The acting is bad - BAD! - and when no one's getting killed, the film tends to be a bit on the boring side. The editing is sloppy, but seeing as they apparently ran out of film while making the movie and ultimately had to piece together whatever footage they had, this technical issue can be overlooked. The fake female torsos that the killer cuts the hearts out of look awful, and the "protagonists" (if you can even call them that) are uninteresting and underdeveloped. But, when you watch a movie called MARDI GRAS MASSACRE - a low-budget slasher that wound up on the Video Nasties list and is still banned in the UK to this day - you can only hope that it delivers two things: sex and violence. Well, I'm happy to report that this film is indeed violent. Sexy? Not necessarily, but there's still a bunch of female nudity in the film. Also, for a movie where pretty much the same thing happens over and over again, it moves along fairly quickly. Recommended for a (drunken) group setting, and worth checking out if you're a slasher completist. 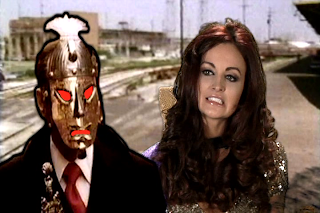 The DVD: Code Red released MARDI GRAS MASSACRE under their new Maria's "B" Movie Mayhem series, which sees former WWE Diva and Playboy covergirl Maria Kanellis play horror hostess. I can't speak for the rest of the DVDs in Maria's series, but this one in particular features Maria introducing the film, and again in another segment when the movie's over. You can also watch the film without Maria's feature, but her bits are brief and also quite amusing. She obviously has a sense of humor about it and pokes fun at herself (and the movie) in these segments. Code Red will be releasing some great titles as part of Maria's series, and I for one will be snatching these releases up. The DVD also contains a pretty informative interview with the actor who played the killer, William Metzo. The bonus features are rounded out by a few trailers and one of Maria's music videos.