Made on a shoestring budget over a period of approximately four years with borrowed equipment, BORDER RADIO essentially started out as a guerilla project by film students Allison Anders , Dean Lent, and Kurt Voss, and it eventually became the cult film that it is today. Most of the cast members consist of family, friends, and musicians, and the film basically tells the story of a well-known underground L.A. musician named Jeff (Chris D. of The Flesheaters) who steals money from a club owner and hightails it to Mexico, leaving behind his wife (Luanna Anders) and ex-bandmate Dean (John Doe) to pick up the pieces and and make sense of the circumstances surrounding his sudden disappearance. 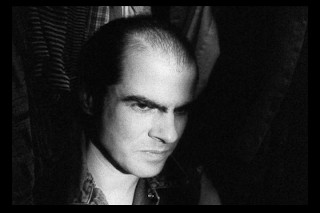 BORDER RADIO could have been a serious, fairly dark film because of the premise and the crime elements, but it's actually a somewhat lighthearted movie that gets progressively more comedic and out-of-control as it moves along. Instead of vanishing off the face of the Earth, Jeff is alive and well in Mexico, where he presumably survives on his stolen loot and drinks beer, hangs out at the beach, plays guitar and does a bit of self-discovery, with seemingly no intention of making contact with the wife and child (played by Allison Anders's daughter, who ranges in age from five to nine years-old in the film) who he left behind. And instead of a distraught estranged wife, Luanna moves on rather quickly and shacks up with Jeff's old roadie, an obnoxious manchild named Chris, resulting in an interesting relationship to say the least. 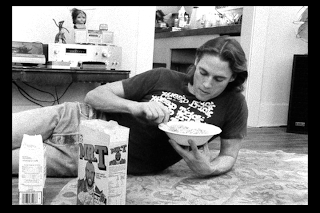 Enough time passes by to where Dean becomes a washed-up musician who spends his days drinking, but he ultimately pulls himself together enough to team up with Luanna and Chris to hunt down Jeff. And speaking of Dean, John Doe - guitarist and vocalist of legendary L.A. punk band X, and also a member of The Flesheaters at one point - has to be one of the best musicians turned actors ever; not the most prolific actor, but he's always looked like a movie star despite not being a trained actor per se. Doe is especially right at home here in BORDER RADIO, bringing his rockabilly style and swagger to a film that could easily be mistaken as being set in South Texas as opposed to Southern Cali. Shout-out to Chris D. as well, who doesn't exactly have the natural movie star looks of John Doe, but he has a magnetic presence when he's on screen. 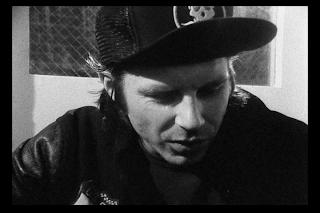 It's apparent from the very first shots of BORDER RADIO that it's a very low-budget DIY kinda film, and I was worried, seeing as this was my first time watching it, that it was gonna be a long 80-minutes. Well, it's not the most fast-paced movie and it does feel a tad longer than its running time because of its somewhat aimless and meandering nature, but there are a few things one must keep in mind when watching this. The intention of the at-the-time aspiring filmmakers was to simply make a movie and not create some sort of masterpiece. Even though it was released by Criterion, it wouldn't be fair to hold BORDER RADIO up to a very high standard. A large percentage of the dialogue was ad-libbed, and in order to save money on film stock, there weren't a lot of second and third takes to speak of. In one scene John Doe is wearing a certain shirt, and in the next he's wearing a different shirt and his hair is slightly shorter. Is it an important movie in the history of cinema, or a game-changing indie movie? Not quite, but it's charming and it's a great time capsule above all else. 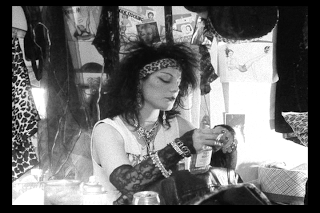 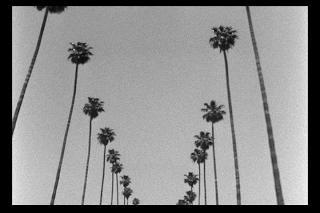 It's almost like the filmmakers knew they were in the midst of a special time and were part of a special "scene" and they wanted to capture it as much as possible. BORDER RADIO doesn't exploit the punk and underground music scene of the time so much as it just truly captures the essence of it in a way that almost defies words. Don't get me wrong, there are other movies or documentaries out there that did a much better job of capturing the early to mid-80's L.A. punk scene, but BORDER RADIO is a film that exists within the scene rather than showing it to you from a voyeuristic point of view. That being said, this is undoubtedly a very important punk film, which is appropriate since the means in which the filmmakers went about making it followed the punk rock DIY principles, which can be said for most indie movies, really, regardless of the subject matter.

To me, BORDER RADIO is a true cult movie and an inherently divisive film; it's more about what this movie means to you rather than what it does for you and how much it can entertain you. I won't deny that it's a bit of a mess in spots, and it's not a film that I'd call a favorite, but as a fan of indie movies that defy their limitations and go on to find an audience in some way, I can't help but appreciate this film. I'm also a sucker for the American Southwest desert setting in films, be it California, Arizona, New Mexico, etc., and BORDER RADIO has it in spades. If you're a fan of indie filmmaking or you have a fondness for the 80's Southern Cali punk scene, this is a must-see.