John's Album of the Week: The Accüsed "Martha Splatterhead's Maddest Stories Ever Told"

ed. - John Ross is a buddy of mine who hails from The Great White North (London, Ontario to be exact). He's a husband and father, but once upon a time he was a crazy young Metalhead who listened to Slayer and rocked a serious mullet as you can see below. Still a Metalhead at heart and a die-hard music enthusiast, John runs a Facebook group called Feed My Ears, where he and friends discuss music that they're into. From Electric Wizard and Pantera to the Beatles and Tori Amos, there's not much that isn't discussed by John and the other members of the group. Looking to do a music segment on The Death Rattle, I naturally reached out to him, and this is the first of hopefully many more music recommendations from Mr. Ross. Also, special thanks to "Demise" for the awesome Photoshop job. 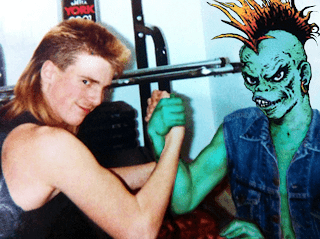 In 1988 I was 17 and fully enmeshed in the Thrash Metal scene. Nuclear Assault, Slayer, Megadeth and Metallica were the order of the day and there was no "wuss" Metal allowed. One day a close friend of mine and fellow "thrasher" had asked me if I had ever heard of the group The Accüsed. I said I had heard their name but didn't think I knew any of their music. "Weren't they some kind of Punk band", I asked. "Just listen", he said, and pressed play on his cassette copy of  MARTHA SPLATTERHEAD'S MADDEST STORIES EVER TOLD. 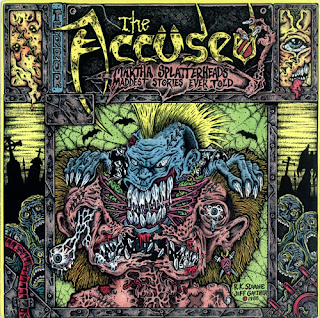 How do you describe The  Accüsed to someone who has never heard them? Well, I guess you start by saying they're a Crossover Thrash band. Crossover Thrash was a hybrid of Hardcore Punk and Thrash Metal, and the scene had started to make some waves in the Metal world with acts like S.O.D, D.R.I  and Suicidal Tendencies getting play from Metalheads. The Crossover Thrash scene was a blast of freshness in the increasingly predictable Thrash Metal landscape. Even amongst their brethren, however, The Accüsed stood out. Guitarist/band leader Tommy Niemeyer's riffs were lean and muscular and combined with Alex Sibbald's bass and Dana Collins's rapid double-kick drumming to form something that could almost be seen as a progenitor of Groove Metal. Then there was the singing - Christ, the singing. To call singer Blaine Cook's vocals "unique" is an understatement of epic proportions. I've heard his vocal stylings described as The Tasmanian Devil on meth and that's not a bad descriptor. Spitting and growling, laughing and moaning, Blaine's vocals were onto themselves - gruff and guttural, but not of the Death Metal/Grindcore type; just simply different and, to this day, I've never heard anything like them. 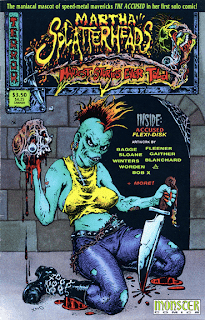 From the opening bass line of "Psychomania", the album's first track, I was intrigued. Then Blaine's vocals started and I was hooked. "What the fuck was that? That singer sounds like Bobcat Goldthwait with rabies", I laughed.
"Just wait it gets even better", said my friend, and it did. What followed were songs about murder, mutilation and cannibalism mixed with some truly outstanding covers: GBH's "Sickboy", Ten Years After's "I'd Love to Change the World", The Angry Samoans' "Lights Out" and the title track, a cover of the Lon Chaney Jr.'s song "The Maddest Story Ever Told" from the movie of the same name (a staple around this house at Halloween). Then there was their mascot Martha Splatterhead - created by Niemeyer - a rather large-breasted zombie character who returned from the grave to dispense gory justice to rapists and pedophiles. As a fan of horror movies,comic books and Heavy Metal, their brand of musical mayhem could not have been more tailored to me. If you're bored with today's Metal/Punk scene, you could do a lot worse then listening to this album or the rest of the Accüsed discography. Two other highly recommended albums by the band are MORE FUN THAN AN OPEN CASKET FUNERAL and GRINNING LIKE AN UNDERTAKER. Give them a shot. You might get hooked.

Choice Cut: "Scared of the Dark"