ARCADE is a Full Moon production that doesn't feature midgets or pint-sized killers for a change. This is a film that's somehow eluded me over the years, and I've actually been looking forward to checking it out despite the fact that I've sort of outgrown these films. I distinctly remember watching quite a few of the Full Moon movies on Cinemax back in the day (around the time that this film came out, actually), and they appealed to me for a lot of reasons. Say what you want about Charles Band (Full Moon's head honcho), but he found a niche and essentially became a Roger Corman-like figure of the straight-to-video market. These films were also the perfect gateway to Horror for curious young people like myself at the time. Mind you, I was a horror fan before the PUPPET MASTER films came into my life, but the accessibility (and abundance) of these films were very beneficial to me as a pre-teen who was hungry for the genre. That said, ARCADE is a movie I've been wanting to see just for the simple fact that it's called ARCADE, and I'm also typically open to seeing Full Moon films that get away from Band's inclination to feature homicidal dolls or puppets.

Unfortunately ARCADE has somewhat of a misleading title, but I'll get to that. Let's start with the lead character, Alex. She's a high-school student full of teen angst, and she sees a psychiatrist to cope with her constant nightmares and the sudden suicide of her mother, not to mention the fact that she lives with her father, who's usually glued to the couch and is insensitive to her needs. Luckily for Alex, she has a tight-knit group of friends (one of whom is played by a young Seth Green) and has a boyfriend named Greg, so at least she won't be slitting her wrists anytime soon. One night, Alex and her friends head out to a local arcade called Dante's Inferno (not the most subtle reference considering how the movie plays out), which is super smokey by the way, where they're given the opportunity to play a new state-of-the-art virtual reality game called Arcade. 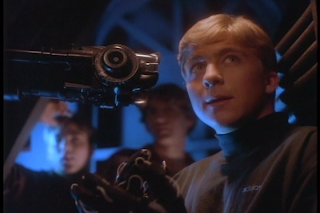 How the game works is that someone sits in a chair, and there are doors that basically lock the person inside of the console. From there, the player puts on a helmet and a pair of gloves that allow them to function once they're transported into the virtual reality world of the game. The object, it seems, is for the player to skateboard through a bunch of corridors and dodge weapons that are protruding from the walls. The player then must beat the level before the time runs out, and in the meanwhile they're being pursued by something known as "The Screamer", which is a disembodied skull that has the power to fuck their shit up. So yeah, it doesn't really sound like an exciting game, but, to be fair, it's a "test" version. 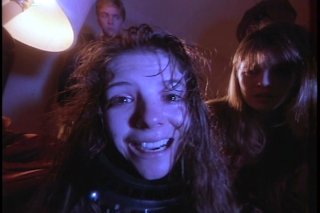 Long story short, Alex's boyfriend plays Arcade and is sucked into the game. Alex and her friends think he just bailed from the arcade for whatever reason, but their eyes are eventually opened to the fact that the game has a will (and personality) of its own, so they race against time to defeat the villainous video game to rescue Greg. Meanwhile, a sketchy guy in a suit who represents the company that created Arcade is handing out home versions of the game like candy to any teenager who's interested, which increases the stakes and the overall threat of the game literally consuming anyone who plays it. So, I guess you could say that Greg is like the Princess Toadstool of this movie and Alex is Mario? Anyway, Alex and one of her friends (the only one left who hasn't been eaten by the game) acquire the game's schematics from its regretful creator and are able to find a crack in the game that allows them both to be transported into its world, and what unfolds is a fairly interesting pay-off that's a cross between TRON (on a much, much lesser scale) and the end of HELLBOUND: HELLRAISER II when all the characters end up in Hell. 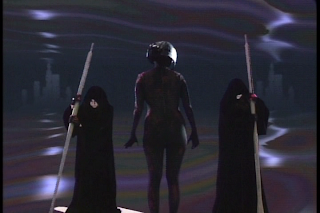 ARCADE, to me, feels like a bastard child of Wes Craven's filmography, despite the fact that he had nothing to do with it. In a lot of ways, this resembles two of the director's most important films: A NIGHTMARE ON ELM STREET and SCREAM (which didn't even exist at the time). There's an evil entity that lives within the game, and it speaks to the players in a very confrontational manner - the same way that Freddy Krueger taunted his victims. Alex herself is very much akin to Nancy from ANOES and Sidney from SCREAM, in that she's not glamorous by any means (a typical "Final Girl" trait), she's loyal to her friends, and she's bookish but has rebellious qualities. And, like Sidney, Alex is coming to terms with the death of her mother. Plus, the characters are upper middle-class suburbanites, and Alex's boyfriend is essentially killed off early in the film just like Johnny Depp in ANOES (spoiler alert!). It should be said, though, that these are all just merely observations on my part and not me trying to suggest that ARCADE is on the same level as any of the aforementioned films. 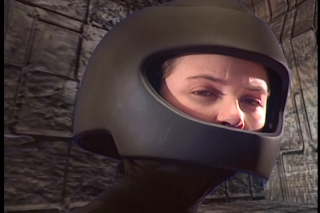 When it's all said and done, ARCADE seems a bit too ambitious for its budget. The special effects are inherently very dated, but there's nothing that can be done about that. Unfortunately, it's a product of its time as far as the technology goes, so you just have to accept it for what it is. The main problem with the movie is that it's simply kinda boring. ARCADE is only eighty minutes, but it's a long eighty minutes due to bad pacing and the overall blandness of the film. It's about as cinematic as an After School Special. In all seriousness, though, I have to applaud the cast and crew for the effort they put into this movie. I think the intentions were there to make something special, but, again, it was perhaps too ambitious given the resources (or lack thereof) that the producers and the majestically-mulleted director, Albert Pyun (CYBORG), were provided with to make it. 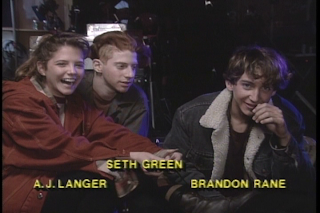 On the plus side, I liked Alex as a character, and I was really surprised by the soundtrack, which mostly consisted of generic-sounding Post-Punk; upon investigating the closing credits, I was impressed to see that the film utilized a song by Blue Oyster Cult. Another thing worth noting is that there's an out-of-left-field sequence towards the end that I found to be chilling and quite disturbing. Yikes. Had the film ended there, I'd be holding ARCADE in higher regard since I'm a sucker for bleak endings, but alas they decided reel everything back in and go with something a little more traditional, resulting in a film that ends about two-minutes too late in my opinion. Finally, as I alluded to earlier, there's a disappointing lack of actual arcades in this movie, and the title is a reference to a game rather than a neon-lit gathering place for young people with pockets full of quarters. As much as this movie has stuck with me, I wouldn't recommend it. You want arcades? Check out JOYSTICKS. You want killer video games? Check out BRAINSCAN or the Emilio Estevez segment in NIGHTMARES.

For a much more well-written review of ARCADE, check out Todd's at the GBTMC.