This is a new weekly feature that I'll be doing throughout September - if I even make it that far. The point of this experiment is to force myself to watch movies I probably wouldn't normally sit through, and also to support my local Mom and Pop video store. What this entails is that I go to the video store, walk up to a specific section, and pick a movie off the shelf without looking. I grab a total of five movies from different sections, and then I watch and review them.

THE HUNCHBACK OF NOTRE DAME (1923)
This is actually my first time seeing any of the HUNCHBACK OF NOTRE DAME incarnations, but, like pretty much everyone else in the world, Quasimodo is a character who's always been engrained in my mind in the same way that Dracula and Frankenstein's Monster are. It's gotten to the point where someone can call another person "Quasimodo" as an insult and everyone within earshot will know what it means, which is a testament to how iconic the character is. As much as it shames me to say, a majority of Lon Chaney's work is a "blindspot" for me, so I was very excited to watch this one. I've scanned the shelves of my video store many times as us movie geeks are prone to do, and I didn't even know they carried this film. Needless to say, I was pleasantly surprised to see this in my hand after randomly grabbing something off the "Classics" shelf. It's like finding five bucks in an old jacket or something!

I'm not one who typically seeks out silent films; I have to be in the mood to watch one, or have a specific reason to check out a particular silent movie. That said, while I was glad to finally watch this, I didn't really know what to expect. Much to my surprise, HUNCHBACK OF THE NOTRE DAME is a lot more fast-paced than I anticipated. And even though I expected the film to be good (or at least have a great Lon Chaney performance), I didn't expect it to be as awesome as it ended up being. Have you ever heard the saying: "To make money, you have to spend money"? It's a true statement, and such is the case with HUNCHBACK. It was a rather expensive production for Universal, and it paid off in the long run; HUNCHBACK, at the time, became their highest grossing film. And the budget shows. The Gothic scenery in the film is quite stunning. Even more stunning is the fact that everything you see was built specifically for the movie. No, this wasn't shot in some European city; instead, Universal created a European city in their backlot. 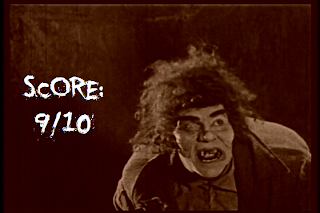 It's easy to see why Lon Chaney is so respected to this day. With him, it's more than just putting on makeup and visually transforming himself into a character. Chaney makes himself unrecognizable in every way possible and becomes the character, and he does it in a way that seems very natural. In the case of his portrayal of Quasimodo, his emotion transcends his costume, the heavy makeup, and our inability as viewers to hear a single word or noise out of his mouth. On top of that, he also does some crazy physical shit, like hang off of ledges and whatnot. Aside from the very high quality of production, Chaney's performance is obviously the highlight. I could go on about this amazing film, but this is already longer than this blog post calls for. Moving on...

LADY JANE (1986)
Of all the movies I watched this week, I dreaded this one the most. I'm not too stoked on costume dramas. Oh well. Fortunately, this one turned out to be pretty good. LADY JANE is based on the true story of the Lady Jane Grey, who had a controversial reign as Queen of England for a whopping nine days. I don't know anything about British royalty and I'm not gonna bluff my way through it. At the core of the film is a love story involving Lady Jane (Helena Bonham Carter) and her husband Guilford Dudley (Cary Elwes). They were initially set up as part of an arranged marriage. With the current reigning King Edward on his death bed, Lady Jane becomes to victim of political maneuvering; she was forced to marry Edward so she could be named his heir before he dies, and, from there, she'll marry someone else of her family's choosing (Guilford), which will be their way of positioning themselves as rulers of England. Despite clashing personalities, Lady Jane and Guilford fall in love, but their relationship becomes doomed for reasons that I won't get into. 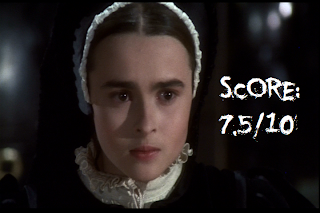 I've never been a huge fan of either Helena Bonham Carter or Cary Elwes. Younger Cary Elwes, sure, but I can think of much more pleasant things to do than watch him in anything these days. I guess my appreciation for young Cary Elwes has to do with me growing up on THE PRINCESS BRIDE - a film I remain fond of these days. As for Carter, I have no nostalgic attachment to her as an actress. I can't think of too many things I've seen her in as a young woman, so I was surprised to see how much of a cutie she was in this. Anyway, LADY JANE is a classy film. The costumes are beautiful and the castles and locations look awesome. Speaking of classy, you also get modern-day internet darling Patrick Stewart as Lady Jane's dad. Everything involving Lady Jane and Guilford is enjoyable; everything else is well-acted and nice to look at, but very uninteresting to me. What I took away most from this is that the British monarchy sucked. Again, good movie, but not my thing.

DEFIANCE (2008)
I'm not even supposed to be writing about this movie right now. I thought it would be cool to switch it up and pick something from the Family section of the video store (which I did), but I wouldn't have felt comfortable checking out the movie I ended up with. The lady who works there knows damn well that I don't have any kids, and the last thing I wanted out of that situation was for her to think that I was some pedophile or something. So I put it back on the shelf and went back to the ol' Action section and ended up with DEFIANCE. 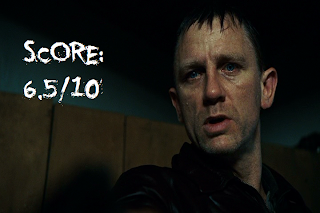 I don't have much to say about this movie. It's kinda slow... and boring at times. This is more of a Drama than an Action film. But I can't really hate on it since it tells an important story - the story of the Bielski brothers, Tuvia (Daniel Craig) and Zus (Liev Schreiber). The Bielskis were Polish Jews who led a partisan during World War II in Nazi-occupied Belarus. Their legacy is that they led one of the most successful rescue missions of Jews during the second World War. Basically, these cats lived out in the forest for two years, killed Nazis, and saved Jews. DEFIANCE gives you an insight into how they ran their camp and formed allegiances, and how some internal fighting and clashing opinions almost destroyed them. DEFIANCE features what might be the best performance of Daniel Craig that I've seen, and Liev Schreiber has some bad-ass moments in it. I'm at a loss for words when it comes to this. I personally think the true story is better than the movie itself. Moving on.

WOLF MOON (2009)
This, ladies and gentlemen, is a 2 hour and 4 minute straight-to-DVD werewolf movie. No straight-to DVD horror movie should be that long, so what makes WOLF MOON so special?! Well, whether it's "special" or not is subjective, but, story-wise, it's a surprisingly ambitious werewolf movie that spends a lot of time with its characters. The character relationships in this movie are like something out of a television series because of how they're developed and, ultimately, how they all weave together in one way or another. But let's make no mistake about it: underneath all the fancy character stuff (some of which is TWILIGHT-esque) is a cheesy low-budget horror movie with lackluster special effects. 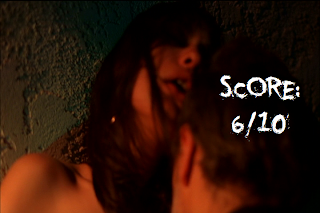 As far as the cast, the most recognizable actors are Maria Conchita Alonso, Billy Drago, and Sid Haig. They're all fine actors in their own right, but them appearing in a movie these days isn't exactly indicative of quality. WOLF MOON is set in a small Nevada town, which I found to be fresh at the very least. It's the type of town where you'd see tons of dreamcatchers. Maria Conchita Alonso plays the sheriff, Sid Haig (who's entertaining in this) plays some crazy right-wing local, and Billy Drago plays a vengeful werewolf-hunting cop. It's weird to see Drago playing a good guy for once, but I like it. And not a creepy good guy either, but a genuinely likable (albeit eccentric) protagonist. As ambitious as the character stuff is, though, it doesn't quite justify the running time. WOLF MOON could have been trimmed considerably, but there honestly weren't many times where I found myself bored. The only major complaint I have is that the horror elements take a backseat to some of the . I went into this thinking I'd hate it, but it's not the case. I'd go so far as to recommend this to werewolf enthusiasts. Bonus points for the rapiest werewolf antagonist this side of Richard Tyson's character in BIG BAD WOLF.

OSAMA (2003)
No, this isn't an Osama Bin Laden biopic. OSAMA was shot in Afghanistan and it tells the story of a family of three women who are trying to survive under the Taliban regime - a regime that forbids women from getting jobs. But when you have no men in your family, what the fuck are you supposed to do? Simple! Cut the hair of the youngest and have her pretend to be a boy. It's like a culturally relevant version of JUST ONE OF THE GUYS set in Afghanistan. I kid, I kid. To be honest, I'm at a loss; I can't write about OSAMA and do it justice.  It's a "slice of life" film that revolves around a culture I can't identify with. However, as a human being, I don't have to know shit about the Taliban to know that the treatment of the citizens of Afghanistan is awful, and that's something we see in OSAMA. What I appreciate about this film, though, is that it doesn't focus on the harshness of it all or exploit what's going on. It comes from a sincere place, and it's made by a filmmaker who loves cinema and wanted to tell a story. 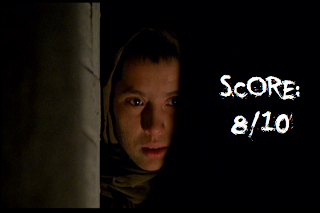 What made this movie for me, aside from getting a glimpse into this foreign land and culture, was lead actress Marina Golbahari. If you ask me a year from now what her performance in OSAMA was like, I probably won't remember; what I will remember is how amazing her face and eyes are. She looks like a little girl who's seen some terrible things in her life. Whatever pain she felt in her life is not something you can buy with a blank check from a Hollywood producer, and it's not something you can manufacture with state-of-the-art special effects. There's something very real and genuine about Marina and everything else in this film for that matter. Also noteworthy is the humor in this film. OSAMA isn't played for laughs by any means, but the humor and warmth comes from the characters who are quietly defiant in the face of punishment and even death. I probably won't watch OSAMA again (not for a long time anyway), but it certainly proved to be an eye-opening experience.