A young Aussie couple, Josh and Tina, on the verge of moving to Asia to start a new life are torn apart by a tragic event involving Josh's friend and fellow lifeguard (and Tina's brother) getting eaten by a shark. So I guess it was really Tina's brother who got torn apart. (*rimshot*) The film jumps ahead however many months or years after the fact. It's revealed that she moved on without him and Josh has taken up a job at a grocery store, presumably to get as far the fuck away from the ocean as possible after such a traumatic event. When the film jumps to this specific point in time, Tina has returned home to Australia with her new man and bumped into Josh at the aforementioned grocery store. Awkwaaaaard. 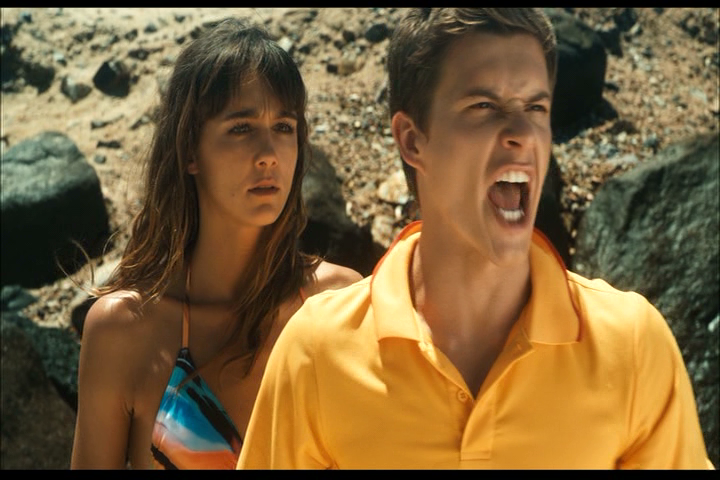 They don't come right out and spell it for you, but there's clearly some resentment there on Tina's part, as if she feels Josh is to blame for her brother dying. On the other hand, he also feels guilt for what happened. We're also introduced to a bunch of other characters, all in this grocery store: a rebellious teenage girl, her cop father, a couple of goons who are planning on sticking the place up, so on and so forth. Their worlds collide when a massive tidal wave traps them all in the building and nearly fills the place up with water. And the irony of it all? They're trapped in there with a couple of big-ass sharks, as if Josh and Tina's past was coming back to haunt them. I'm sure you can guess how the rest of the movie goes, so I'll spare you the long-winded synopsis. 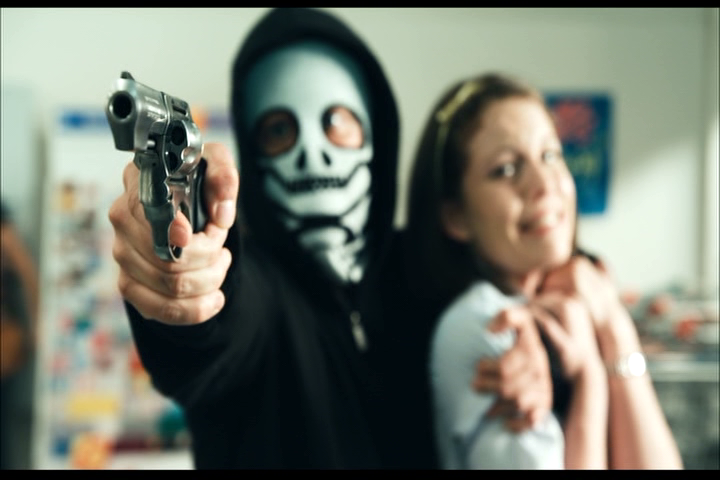 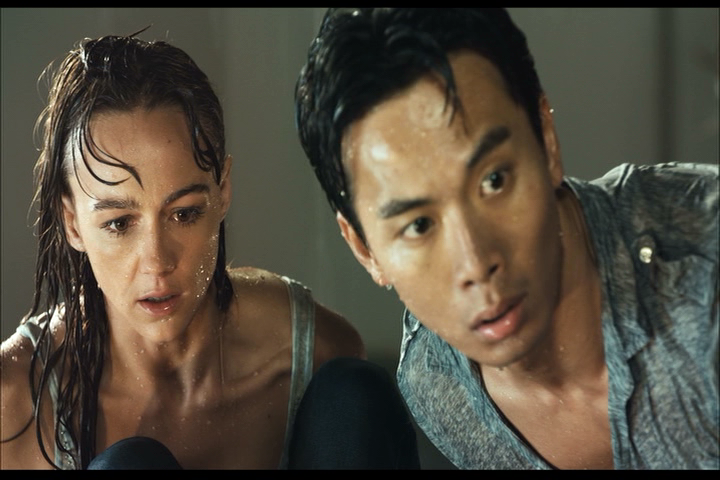 Most of you reading this might know BAIT as "BAIT 3D". Between this and SHARK NIGHT 3D, I don't recall this particular movie being talked about by a lot of people. If I had to guess, this was made as a response to the success of PIRANHA 3D (and its sequel to a lesser extent). I personally watched this in two dimensions, but it's pretty obvious where the 3D parts are. That said, it seems like they really went all-out with the 3D gags right off the bat as a way to set the tone, similar to how PIRANHA 3D started. The rest of the film has its moments but it never quite gets as in-your-face, so to speak, as the opening. One of the highlights is when the tsunami hits the land and wipes out a bunch of civilians who are running for their lives like cockroaches scurrying to get back to their dark corners when someone turns the light on. It's quite the spectacle and very reminiscent of old-school disaster movies. 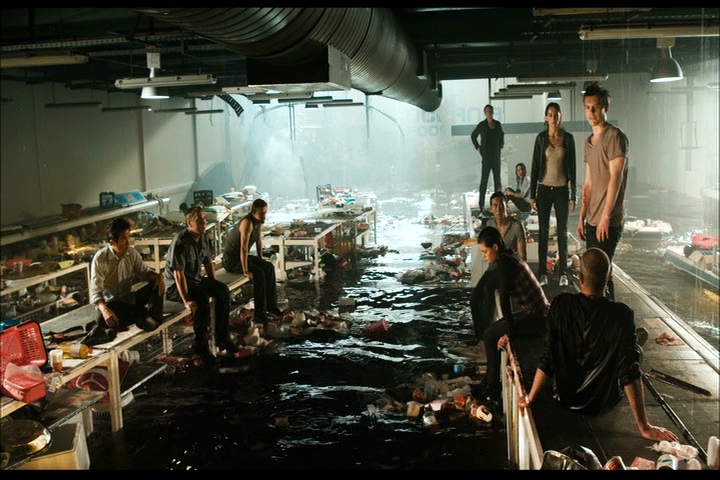 Once the characters find themselves trapped, the film goes back and forth between the people in the store and a young couple who are trapped in their car in the parking garage, where another shark is circling them. You'd think this would just be some big survival-fest where a bunch of people try not to get eaten by sharks and wait for a miracle to happen, but, aside from that, there's a lot going on that keeps it moving along at a good pace. Of course the sharks play a big part in what's happening, but there's also the character interactions in general and the incorporation of other threats to their safety. 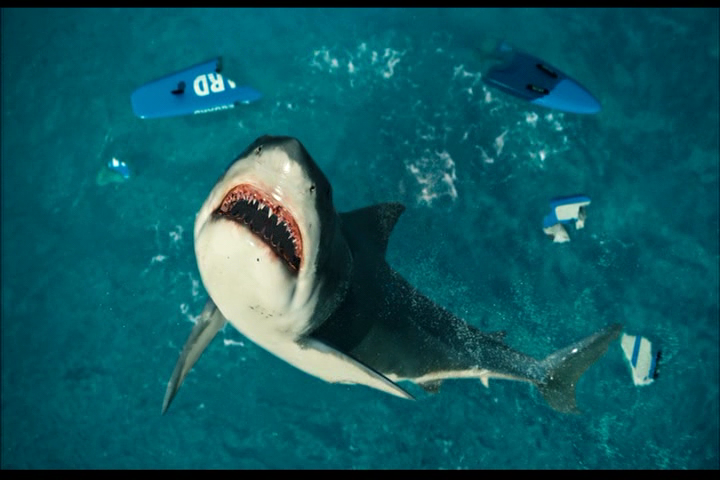 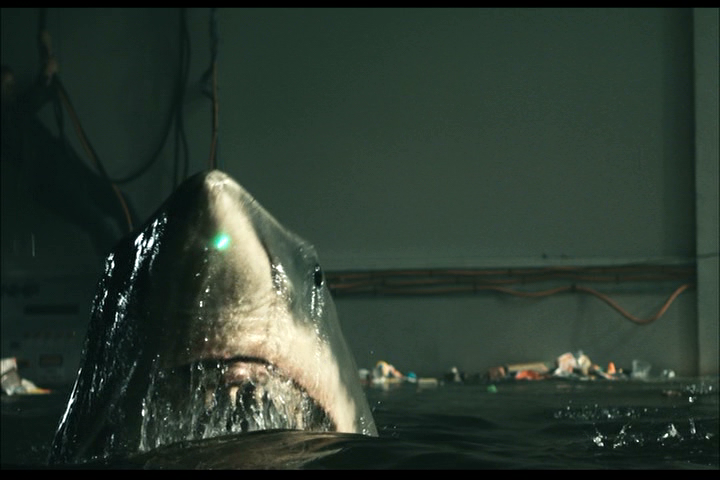 The sharks themselves are mostly CG, which doesn't look great. Like most of the special effects in the movie, the sharks don't look awful but they don't look spectacular either. The close-up shots of the sharks, or shots of just the heads of the sharks poking out of the water, are practical effects though. But, considering that one of the sharks jumps out of the water at one point (like twenty feet in the air no less), the CGI is understandable. And, to be honest, the practical sharks don't look a hell of a lot better anyway. While I'm on the topic of some of the film's technical aspects, I have to give a shout-out to the stunt department and anyone who was involved with keeping the film's continuity in check. This looked like a nightmare to shoot from a continuity standpoint.

I don't have a lot more to say about this one. The ensemble cast is pretty good. The only two people I recognized were Dan Wyllie (ROMPER STOMPER, SANCTUM, ANIMAL KINGDOM) and Sharni Vinson (YOU'RE NEXT, the remake of PATRICK). The film isn't as over-the-top and ridiculous as PIRANHA 3D, which is sort of what I was expecting it to be. It's more along the lines of something like ROGUE, except with sharks instead of a croc and a bit more lighthearted in spots. There's a decent amount of gore but it's not a total massacre. Considering how many people just stood around and contributed nothing for the duration of the movie, I think a few more characters could've been killed off. Overall, it's not even close to being the worst shark movie out there, but there are certain things about it that keep it from being a great and memorable horror film. For being a gimmicky horror movie, though, it's pretty solid and definitely worth a watch if you just want something fun to have on in the background on a Saturday night.