Reader's Choice: The House with the Laughing Windows (1976)

The ongoing Reader Request theme on the Death Rattle has seen some firsts for yours truly, and HOUSE WITH THE LAUGHING WINDOWS is no different, as it's my first Pupi Avati movie; yes, it's pronounced "Poopy", so go ahead and chuckle and get it out of your system. Good? OK... moving on.

Avati is a filmmaker who's gained a cult following outside of his native Italy despite his readily-available output not being as extensive as, say, an Argento or a Fulci, and this particular film is probably his most well-known, or at least his most accessible. I was under the impression beforehand that it was a Giallo, but I quickly found out during my viewing of the film that it's not the case. If anything, it's a very loose and unconventional Giallo, but to label it as such would not be doing this bizarre film any justice.

Our lead character, Stefano, is hired to restore a badly-damaged painting in a church, and so he travels to an isolated rural town in order to do so. According to Stefano's guide - a dwarf named Solmi - the church was apparently used by Nazi's during World War II, but that's besides the point. Upon arriving, Stefano meets a few of the eccentric locals and it isn't long before things get downright weird. It begins with a moderately threatening phone call in which a mysterious person on the other end basically warns Stefano that the painting is bad news, and that he should cease working on it immediately and leave town. The calls continue, on top of the fact that the dark origins of the artist responsible for the painting in the church are slowly unraveled. Oh, and the painting? Yeah, it's just of some poor guy being stabbed to death by a couple of gnarly-faced assailants. In a church. No big deal. 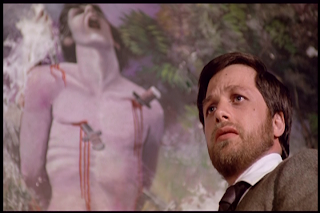 I'm not sure if there's a term out there for the sub-genre, but HOUSE WITH THE LAUGHING WINDOWS is one of those films where someone ends up in a small town (in most cases by way of being stranded, but in some cases voluntarily) and soon realizes that all is not well, whether it be because of the locals, the town's history, etc. HOUSE has some of the stylistic flourishes of a Giallo, but alas there's no boobs nor black-gloved killer to be found here. As the film progresses, it descends into a nightmarish territory in which Stefano's reality becomes blurred. A touch of Fulci's THE BEYOND, but without the zombies and gore, and heavy on the atmosphere. As Stefano's desire to learn more about the mysterious artist becomes overwhelming, he uncovers a creepy tape recording that speaks of "colors running like blood" and ends up investigating decrepit old houses, with no real explanation as to how he got there. 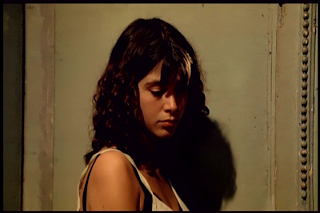 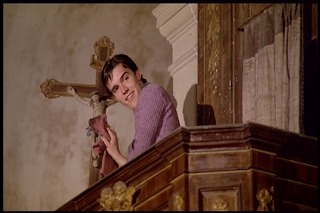 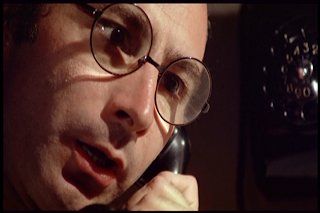 HOUSE has perhaps one of the most ominous, creepiest and unsettling openings I have ever seen in a horror film. Footage of a man being brutally stabbed (presumably the inspiration for the painting in the church) over composer Amedeo Tomassi's eerie piano score, all while a distorted voice rambles on about "colors running like blood". Avati promises a lot with this opening sequence despite the vagueness of its meaning and presentation, but I'm happy to report that the film delivers. Speaking of Amedeo Tomassi, which consists of minimal piano and synth compositions, is a key factor in the film's overwhelming atmosphere. And it's because of the occasional synth compositions combined with the overall look of the film that HOUSE has a very 80's feel to it. The film has an look and feel that resembles a low-budget made-for-TV movie, albeit an Italian made-for-TV movie without the restrictions of an American production.

With a zombie movie, there's always the survival of the lead characters on the line. With a Giallo, there's the inevitable reveal of the mysterious killer that awaits the viewer. That being said, the great thing about this movie is that, because it doesn't fall into a conventional category, there's a certain level of uncertainty as far as what direction it ultimately ends up going. People close to Stefano are being killed, and one would assume it has to do with his involvement in restoring this supposedly damned painting, but assumptions are all you really have to work with here. To say that the narration here is unreliable would be an understatement, and I mean that in a good way. All the way up to the film's shocking conclusion, Pupi keeps you guessing, and even then there are no definite answers. Highly recommended for viewing on a quiet night, with the lights turned out.