SUMMER OF BLOOD, Day 81: Behind the Mask: Leatherface

I've been toying with the idea of a "Behind the Mask" feature for almost two years now. As some of you know, I love masks and I've been fascinated with them since I was a kid. And not just masks, but monster make-up, face paint, and theatrics in general as well. This all stems from my early days watching pro-wrestling, cartoons, and eventually horror movies. My favorite characters were Demolition, Jason Voorhees, and the many masked villains of G.I. Joe. I even loved the masked "jobbers" of WWF, like the Conquistadors and Shadows. With my introduction to Gwar at nine years-old and later Slipknot and Mushroomhead, this interest in masks carried over into the world of music. Of course this was all pre-internet, so part of what drove my interest in these figures was the desire to know more about the people behind the masks.

This Behind the Mask feature isn't original by any stretch, but it's my own personal way of shedding light on some of the people in music and film (and maybe even pro-wrestling) who make a living out of covering their faces or wearing disguises.

Kicking off Behind the Mask is a look at the men who played Leatherface in the TEXAS CHAINSAW MASSACRE movies. So let's get started shall we? Mind you, a lot of the information provided in this post is simply taken from various online sources.

Gunnar is known as a smart, well-spoken, and funny person by the people who've met him. He played football in high school and is a former bouncer. On a whim, he auditioned for TEXAS CHAIN SAW MASSACRE as a young man living in Austin, TX and got the part. He starred in a film called DEMON LOVER after that and subsequently decided to step away from acting to focus on writing. During that time, he apparently turned down a role in Wes Craven's THE HILLS HAVE EYES. He eventually made a return to acting in the late 80s with HOLLYWOOD CHAINSAW HOOKERS and began to sporadically appear in films here and there while continuing to write. He had a role in MURDER-SET-PIECES, which also starred his TEXAS CHAIN SAW co-star Edwin Neal but they didn't appear on screen together. Gunnar also appeared in 2013's TEXAS CHAINSAW 3D as a new character in the TCM mythology, Boss Sawyer, alongside Bill Moseley and John Dugan, who both appeared in TEXAS CHAINSAW MASSACRE 2 and the original TEXAS CHAIN SAW MASSACRE respectively. He also appeared in TEXAS CHAINSAW 3D as the original Leatherface through archive footage. 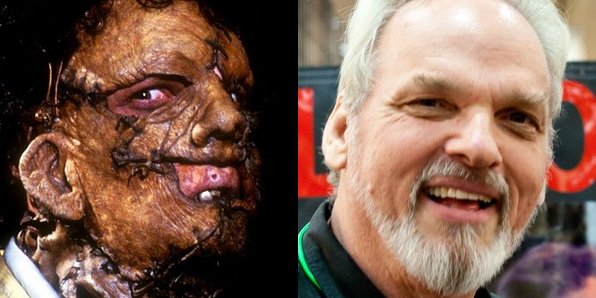 Bill Johnson's most well-known role is as Leatherface in 1986's TEXAS CHAINSAW MASSACRE 2. He made his film debut a year prior to that in FUTURE-KILL, starring alongside Edwin Neal and Marilyn Burns of the original TEXAS CHAINSAW MASSACRE as one of the "Mutants". Bill has continued to appear in films here and there but also acts in theater. While he's known mostly for playing a chainsaw-wielding maniac, Bill, in real life, is a fan of opera and poetry. One of his most recent films, BUTCHER BOYS, reunites a number of people who were involved with the original TEXAS CHAIN SAW MASSACRE: writer Kim Henkel and actors Edwin Neal, Marilyn Burns, John Dugan, and Teri McMinn. 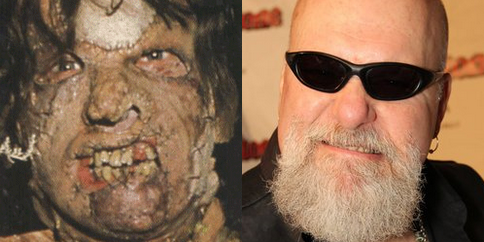 Date of Birth: Unknown
Born in Townville, PA
Height: 6'3"
Age at the time of the film's release: Unknown
On-screen kills as Leatherface: 3

R.A. had a short stint as a pro-wrestler once upon a time and has appeared in various films and TV shows, including an episode of FULL HOUSE the same year that LEATHERFACE: TEXAS CHAINSAW MASSACRE III was released. R.A. also has a bit of a history with actor/stuntman Kane Hodder, who's mostly known for playing one of Leatherface's rival horror icons Jason Voorhees, which dates back to when Kane worked as the Stunt Coordinator on LEATHERFACE. They also appeared together in Adam Green's HATCHET II and are both members of the paranormal research team Hollywood Ghost Hunters, which was founded after Kane and R.A. both filmed a movie called FALLEN ANGELS in the allegedly-haunted Mansfield Reformatory.

TEXAS CHAINSAW MASSACRE: THE NEXT GENERATION (1994)
Played by Robert Jacks

Robert Jacks (known as "Robbie" to friends and family) is, as of this writing, the only fallen member of the Leatherface family, having died at a young age due to abdominal aneurysm. There's not a lot of information on Robert, but he was apparently the antithesis of the type of person you'd expect to play a cannibalistic chainsaw-wielding maniac - even more so than any of the men who preceded him. He was reportedly friends with actor Viggo Mortensen, who played one of the antagonists in LEATHERFACE: TEXAS CHAINSAW MASSACRE III and recorded a song with Deborah Harry (Blondie) called "Der Einziger Weg (Love Theme from Texas Chainsaw Massacre: The Next Generation)". Robert is falsely credited on a few websites as starring in the 2002 horror-comedy/spoof SCARY MOVIE, when in fact he starred in an obscure 1991 horror movie of the same name alongside John Hawkes, who appeared in FUTURE-KILL with TEXAS CHAINSAW MASSACRE alum Bill Johnson, Marilyn Burns, and Edwin Neal.

Andrew Bryniarski is the only actor to play Leatherface twice and one of only a few actor to appear in two consecutive TEXAS CHAINSAW MASSACRE movies. He's a former bodybuilder who was discovered by an agent while visiting a friend in Los Angeles. This led to him being cast in HUDSON HAWK, which kickstarted his acting career. Subsequently, he's gone on to work with directors like Tim Burton and Oliver Stone and is primarily known for his memorable performances in Football movies like THE PROGRAM, NECESSARY ROUGHNESS, and ANY GIVEN SUNDAY. He was typically cast in films because of his large stature and intimidating appearance. Andrew appeared in 2008's STILETTO as a Nazi biker alongside R.A. Mihailoff, who played Leatherface in LEATHERFACE: TEXAS CHAINSAW MASSACRE III. After 2006's reboot prequel TEXAS CHAINSAW MASSACRE: THE BEGINNING was released, the Platinum Dunes studio decided to scrap the idea of a potential film series, leaving Andrew to hang up the mask and chainsaw for good. 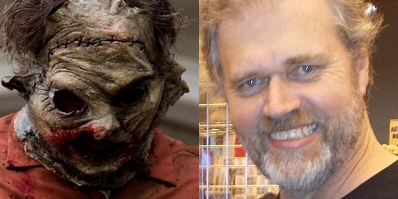 Date of Birth: Unknown
Height: 6'6"
Age at the time of the film's release: Unknown
On-screen kills as Leatherface: 5

There's not much information out there on the tallest man to portray Leatherface, Dan Yeager. His film credits are few and he doesn't reveal a lot of personal information in his interviews. I personally reached out to him just prior to the release of TEXAS CHAINSAW 3D about doing an interview but he never got back to me. Given the financial success of TEXAS CHAINSAW 3D, I'm surprised there isn't at least a sequel in production. If another film were to be made, time will tell if Yeager reprises the role and takes another swing at it. 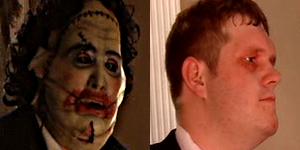 Date of Birth: Unknown
Height: Unknown
Age at the time of the film's release: Unknown
On-screen kills as Leatherface: 0

I couldn't find any information whatsoever on Sam McKinzie, who played Leatherface in the prologue of TEXAS CHAINSAW 3D, essentially picking up where Gunnar Hansen left off in the original film. This is Sam's only credit as an actor.