Not a hairy macho bullshit movie per se, but HOW TO KILL A JUDGE deserves coverage for a couple of reasons. First, it stars Franco Nero, whose mustache is out of control in this. Second, it's directed by one of the more interesting filmmakers who tackled Eurocrime, Damiano Damiani. Focusing less on the exploitation elements of the Eurocrime genre (rape, dirty cops, kidnapping, bloodshed), Damiani's films are much more politically-driven than your standard Eurocrime movie. Prior to this I had only seen one of Damiani's other films (CONFESSIONS OF A POLCIE CAPTAIN, which I enjoyed), and based on the strength of that film I knew that I'd be remiss if I went out of my way to cover Eurocrime and didn't show Damiani some props.

Franco Nero plays a controversial, politically-aware filmmaker named Giacomo Solaris. He releases a short film that basically addresses (and exposes) the idea that State Prosecutor Traini has ties to the mafia and was involved in a flawed court case that saw a well-known criminal getting a slap on the wrist and set free. The short film ends with Prosecutor Traini being assassinated, which obviously stirs up some trouble for Solaris, who's threatened with charges relating to defamation of character. But before the threats turn to promises, Traini is actually killed, and Solaris is subsequently held responsible by those close to the Prosecutor. Lawyers, mobsters, and cops get involved; lots of speculation ensues and people mysteriously turn up dead. 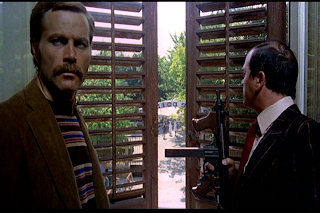 For the reasons I mentioned earlier. HOW TO KILL A JUDGE may be a turn-off to anyone who goes into the Eurocrime genre with hopes of exploitation, but Damiani's films (well, the two that I've seen) can be rewarding. For example, this film in particular is heavy on dialogue and there's a lot of information to process in a very short amount of time, and despite the fact that it can be a bit confusing and a little too fast-paced in terms of dropping information, it's intelligent, well-acted, and incredibly well-written. I actually had to go back and watch the first part of the movie to get a better understanding of what was going on, and even by the time the movie ended I still wasn't sure who certain people were, but in going back and re-watching the first part of the film I was able to figure out who the killer was and pick up subtle clues that I missed the first time around. Well, I narrowed it down to two people and was ultimately correct in assuming one of them was at least involved.

Seeing as how the lead character of this movie is a director whose work gets him into trouble, one would assume that HOW TO KILL A JUDGE is a self-referential film full of commentary on the obvious, but according to Damiani it's not the case at all. The film is a murder mystery at it's core, and the point of the film, according to the director, was to play with peoples' expectations while making a commentary on how everyone is so quick to blame the mafia on everything when, in fact, anyone is capable of committing crimes. However, if you still want to look at HOW TO KILL A JUDGE as a "meta" film, it wouldn't be too much of a stretch. 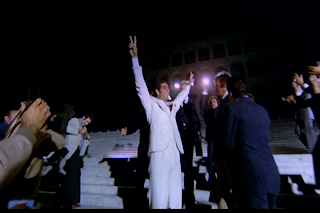 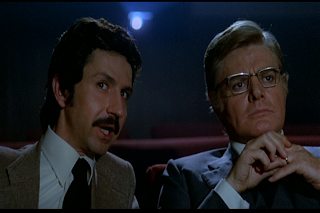 While I did find the film to be impressive on a cinematic level, a lot of it went way over my head. Outside of what I see in movies, I'm not familiar with Italy's political troubles and how much of an impact the mafia has in the country, so the statements that the film try to make don't mean anything to me personally. Looking beyond that, it's still a solid and intriguing murder mystery regardless, with the political element being something that simply pushes the story along. The biggest problem I had with it, as I mentioned earlier, is that it has a tendency to be confusing in terms of who's who and putting names to faces, but the solid acting and filmmaking was enough to make me forget about that. Franco Nero, as always, is the man, and the supporting cast is great as well. Recommended, but not as a starting point to anyone looking to get into Eurocrime. Also, for what it's worth, I prefer CONFESSIONS OF A POLICE CAPTAIN.