Sometimes truth is stranger than fiction, and such is the case when it comes to the bizarre real-life incident that inspired the Stuart Gordon-directed STUCK. I can't say exactly how much of this film was embellished for cinematic purposes, but the general story is still intact: a woman hits a man with her car, drives home with him stuck in his windshield, and leaves him to die in the garage. I've come across my share of stupid drivers in my life, but the woman who inspired this story may take the cake. 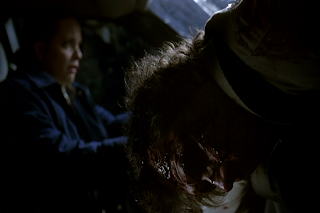 Mena Suvari (AMERICAN BEAUTY) plays Brandi - a young woman with unfortunate cornrows who works in a nursing home and has a bright future in her field of work. In fact, she gets a promotion right before the shit hits the fan. Speaking of which, to celebrate her new promotion at work, Brandi goes out to celebrate with her best friend and co-worker Tanya and her boyfriend/drug supplier Rashid. Long story short, she gets annihilated and decides to drive home instead of catching a ride with Rashid, and it's this mistake that changes her life for the worst. 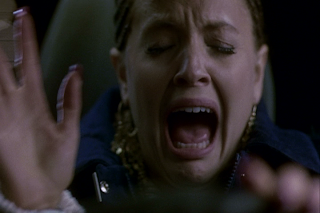 Getting behind the wheel while drunk or high is certainly nothing to make light of, but I'd be lying if I said I didn't do it countless times in my life. My hard-partying days are behind me, but there have been times back in the day where I've driven home from bars while blackout drunk. I've never hit anyone, thankfully, but that doesn't make it OK, and it doesn't change the fact that I could've ended someone's life (or my own) had I been in the wrong place at the wrong time or not paying attention at the right moment. That said, I can sort of sympathize with the character of Brandi to an extent. When it comes down to it, what would you do if you were in her situation? Perhaps some of you may have never driven drunk in your lives (or have even driven a car for that matter), but we've all done questionable things while no one else was there to witness it. Don't get me wrong, I'm not defending the actions of the fictional Brandi or the woman who inspired her, but I can understand why she'd make such an idiotic decision, and the film actually does a good job of justifying her logic without ever taking away from the fact that she victimized someone. 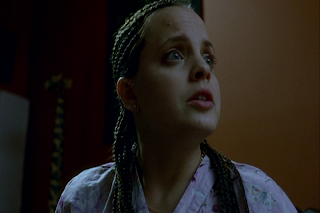 One surprising thing about STUCK is how funny it is; not just darkly comedic (which it is for the most part), but laugh-out-loud funny as well. The comedy comes as a result of Stuart Gordon focusing on the absurdity of the crime, and some of the credit goes to Mena Suvari, who does an incredible job of selling the ridiculousness of it all. Aside from AMERICAN BEAUTY I've always been sort of indifferent to Suvari and I was admittedly a little hesitant to get into this movie because of the fact that she looks silly with her hair braided and I was worried I wouldn't be able to take her seriously, but she's actually really fucking good in this. Another comedic element comes from Stephen Rea's character, Tom, as the Man Who Wouldn't Die. There's a lot of irony in his character considering he's down on his luck and has nothing to live for, but yet he absolutely refuses to die. One of the funnier moments in the film comes when Suvari's character initially parks her car in the garage and simply apologizes to her new bloody hood ornament before going inside. 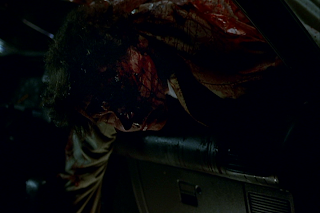 Again, I know the gist of the true story but not the details. That being said, STUCK takes place over a period of what seems like two days, maybe three, which is crazy considering that Rea's character is bleeding like a stuck pig and tangled in a web of broken glass and metal. Stuart Gordon does a good job with the pacing though. Every time there's a chance for Tom to be saved, his hopes are dashed by unfortunate circumstances, which sort of ties into the bad luck that his character is plagued with before he's even struck by Brandi's vehicle. It should also be noted that there's a decent amount of gore, which is appropriate considering the nature of the crime, but Gordon doesn't linger on it too much with the exception of a cringe-inducing but funny scene involving a dog and a bone. Overall, STUCK is pretty decent, very watchable, and a lot better than I thought it would be. If I have a major complaint, it's that the very end of the movie is sort of limp considering the overall craziness of the climax. Mena Suvari is the standout for me, but the film's elements all across the board are quite good, from Gordon's approach, to the story, to the pacing, to the comedy.