And here we have yet another comedy about a struggling rock band, except with this one there's a horror twist. I first watched SUCK the year before last and thoroughly enjoyed it, but what I took away from it the most were the fantastic visuals. I thought "If this was what every movie shot on a RED camera is gonna look like, then we're in for a treat." Unfortunately it wasn't the case, as a lot of genre movies that utilize the RED cameras look quite bland - the ones that I've seen anyway. Visuals aside, I thought SUCK was a decent film that I liked despite its flaws, and I even went on to interview musician Dimitri Coats, who stars in SUCK as a vampire named Queeny and, at the time, was just getting started as a member of the hardcore punk supergroup OFF!, who've since gone on to be fairly successful and are still touring the world. 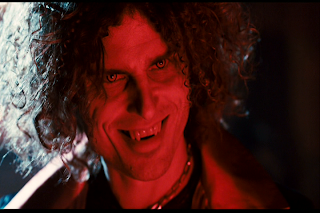 Watching it now, I wasn't as stoked on SUCK as a whole as the first time around, but I still enjoy certain elements about it. For those who haven't seen it, The Winners are a Canadian indie rock four-piece who are in the midst of trying to get their big break. As they're on the verge of playing at a major music showcase, their manager (played by one of the KIDS IN THE HALL) bails on them, and so they pack up their custom hearse and head out with their roadie, Hugo, who constantly refers to himself in the third person for whatever reason. Before their quest even begins, however, their bassist Jennifer leaves one of their gigs with the aforementioned Queeny and reunites with the rest of the band the following day as a vampire. 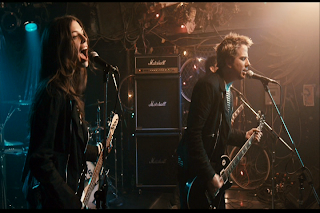 The vampirism in the film, at times, seems to be a metaphor for drug addiction, particularly heroin, which sort of goes hand-in-hand with peoples' perceptions are of what it's like to be a rock star. The idea is that Queeny gets Jennifer hooked, and she spends early parts of the film keeping her blood-addiction a secret from the rest of the group, but it's done so in a comedic manner that borders on slapstick. The band eventually finds out (which happens early on, so it's not a spoiler), and when Jennifer is sort of outed as a vampire, it attracts more attention to the band that they'd ever dreamed of, making them an attraction of sorts. The rest of the band sans Hugo eventually turn, which is the equivalent of them selling out. They later question the circumstances surrounding their new-found stardom and essentially debate amongst themselves whether fame is worth killing innocent people and drinking their blood, and so they team up with a vampire hunter by the name of Eddie Van Helsing (Malcom McDowell) to track down Queeny and put an end to the curse. 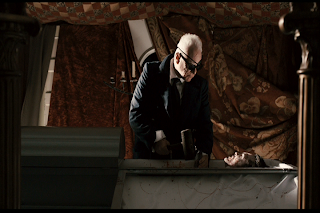 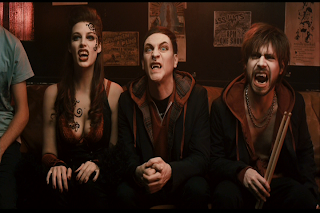 When watching SUCK a couple of years back, it was a big surprise. I hadn't heard anything about it, and the only reason I watched it was because Henry Rollins was in it - not that he's a big selling point for me when it comes to movies or anything, but I figured him starring in a vampire comedy would be interesting at the very least. Aside from Rollins and Dimitri Coats, SUCK is rife with appearances from musicians; Alice Cooper plays a mysterious supernatural character, Iggy Pop plays an aging rock star who owns a recording studio, and Moby of all people nearly steals the show as the vocalist of a shock-rock band called the Secretaries of Steak who celebrate the slaughtering of animals (ironic considering Moby is a vegan). Another musician who turns up is Rush guitarist Alex Lifeson as a border cop who gives The Winners a hard time when they try to enter America, eventually going easy on them when he finds out they're musicians, which leads to a wink wink nudge nudge piece of dialogue from Lifeson ("I used to be in a band!"). 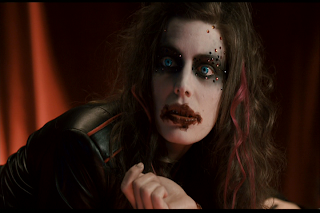 While I'm not as crazy about SUCK as I used to be, it's still a cool little horror-comedy that also acts as a love letter to the history of rock music. Throughout the film are little Easter eggs and homages to various iconic images and even films that have a place in rock music's history. But, if I were to be critical, I'd point out the weak script, certain plot holes that can be overlooked but are glaring nonetheless, and the inconsistency of how the vampirism is presented - at times its an obvious metaphor for drug addiction, and at other times they're just plain ol' vampires, although I do love that the convention of hypnosis is hilariously included. Problems aside, it looks amazing, the short running time (only a little over eighty minutes excluding the end credits) keeps it from overstaying its welcome, and both Jessica Paré (who I haven't even talked about yet) and Dimitri Coats are standouts as far as the cast is concerned. Overall, pretty enjoyable and a good Saturday night movie.